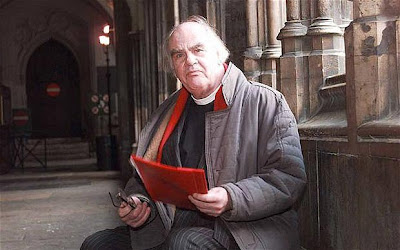 In many ways it was surprising that he never held high office in the Church, and many believed that he should have done; but although he was for two spells a cathedral residentiary canon, he was not an institution man, preferring instead to be a ecclesiastical gadfly. This he certainly was, and on many occasions it landed him in controversy. The first sign of his lack of reverence for authority came early. While a student at King’s College, London, he purloined the Bishop of London’s hat — a gift from America in the 10-gallon style — and requested a gift to charity for its return. The Bishop was not amused; neither were the college authorities, and the episcopal hat was returned with an abject apology. Many years later there was trouble with another Bishop of London. Dr Gerald Ellison’s translation from Chester to London led James to criticise the move publicly on the grounds that the bishop was ill-equipped for the post. Twenty years later he was in even deeper trouble when, in the course of a sturdy defence of homosexual priests, he declared on television his own homosexuality.

It would be a mistake, however, to conclude from these and other colourful incidents that James was no more than a superficial controversialist. From 1978 to 1996 he held the office of Preacher of Gray’s Inn, and Sunday by Sunday he attracted the attention and won the gratitude of a congregation of judges and barristers with sermons of profound depth and striking contemporary relevance. Four collections of these sermons were published and widely read. His work as Director of Christian Action, in which he inherited the mantle of Canon John Collins, was of considerable significance, not least in suggesting, then servicing, an Archbishops’ commission which produced the influential report Faith in the City (1985).

The rejection by the General Synod in 1972 of proposals for Anglican-Methodist unity led, however, to his resignation from the Synod. He told the Archbishop of Canterbury that a 45,000-mile journey through developing countries had convinced him that he should “not waste further time in such a body”.

By the authority invested in me as a low profile, Church of England dissident, I hereby declare Eric James to be the patron saint of gadflies. May he rest in peace and rise in glory.