... which he really ought to have changed by deed poll to fit in with his image. I mean, a rasta called "Justin Duckworth?!" It ain't right, man. 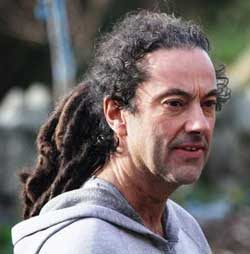 From THE CHRISTIAN CENTURY:

A dreadlocked priest who is usually seen in shorts and bare feet is to be the new Anglican bishop in New Zealand’s capital city, Wellington. Justin Duckworth replaces Bishop Tom Brown who recently retired after 14 years.

In announcing the appointment on April 29, Archbishop David Moxon pointed to Duckworth's lifestyle, Christian discipleship and mission, citing more than 20 years of mission to street people and those on the margins. "I am confident that his election will challenge, invigorate and grace the church with a deep sense of the breadth and height and depth of the love of God," Moxon said.

While Duckworth said he feels "humbled, privileged - and terrified," he believes the Anglican Church has huge potential for change. "I think the Anglican Church is doing amazing stuff, and is a total treasure. But it's a treasure that needs to be dusted off. God wants his people to go on a journey – and if we have the courage, he’ll be faithful to equip and sustain us," he said.