After much reflection and with certainly no wish to shock, I felt I was left with no option but to suggest, for the first time in half a century of my Anglican priesthood, that Jesus may well have been homosexual. Had he been devoid of sexuality, he would not have been truly human. To believe that would be heretical.

Heterosexual, bisexual, homosexual: Jesus could have been any of these. There can be no certainty which. The homosexual option simply seems the most likely. The intimate relationship with the beloved disciple points in that direction. It would be so interpreted in any person today. Although there is no rabbinic tradition of celibacy, Jesus could well have chosen to refrain from sexual activity, whether he was gay or not. Many Christians will wish to assume it, but I see no theological need to. The physical expression of faithful love is godly. To suggest otherwise is to buy into a kind of puritanism that has long tainted the churches.
Whether Jesus was gay or straight in no way affects who he was and what he means for the world today. Spiritually it is immaterial. What matters in this context is that there are many gay and lesbian followers of Jesus – ordained and lay – who, despite the church, remarkably and humbly remain its faithful members. Would the Christian churches in their many guises more openly accept, embrace and love them, there would be many more disciples. (Paul Oestreicher, THE GUARDIAN) 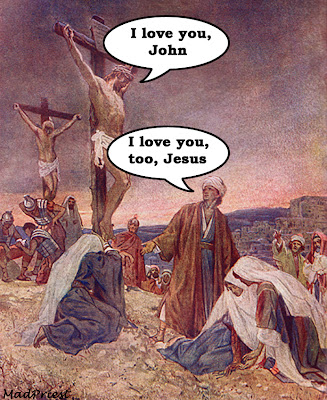