Well, the Vatican's visitation to the female religious orders in the United States appears to be over and the result is as bullying, as patriarchal and as misogynist as everyone (including, no doubt, every Roman catholic in the USA) was expecting. Basically, the women are to stop thinking for themselves and do  what a man tells them to do from now on. Quelle surprise!

The Vatican's Congregation for the Doctrine of the Faith has ordered the largest leadership organization for U.S. women religious to reform its statutes, programs and affiliations to conform more closely to "the teachings and discipline of the Church." The Vatican also said Wednesday it has appointed Seattle Archbishop Peter Sartain to oversee the Leadership Conference of Women Religious (LCWR), which has been the subject of a "doctrinal assessment" by the Vatican congregation since 2009, and has given him power to review and revise the organization's policies. The news came in a press release Wednesday morning from the U.S. bishops' conference, which was accompanied by an eight-page document of the doctrinal congregation and a one-page statement from Cardinal William Levada, prefect of the congregation. According to the document from the congregation, Sartain is to be given authority over the group in five areas, including:

Revising LCWR statutes;
Reviewing LCWR plans and programs;
Creating new programs for the organization;
Reviewing and offering guidance on the application of liturgical texts;
and Reviewing LCWR's affiliations with other organizations, citing specifically NETWORK and the Resource Center for Religious Institutes.

According to the letter, Sartain's mandate runs for "up to five years, as deemed necessary." Sartain is also expected to set up an advisory team including clergy and women religious, to "work collaboratively" with LCWR officers and to "report on the progress of this work to the Holy See." "In this way, the Holy See hopes to offer an important contribution to the future of religious life in the Church in the United States," the letter states.

There has been no official response from the ladies as yet. But I can imagine what's being said in the women's bathrooms at the convents (which are probably the only places on earth that they can now get away from theologically perverted dirty old men trying to look up their theological skirts).

Thanks to Whiteycat for sending this story to me. 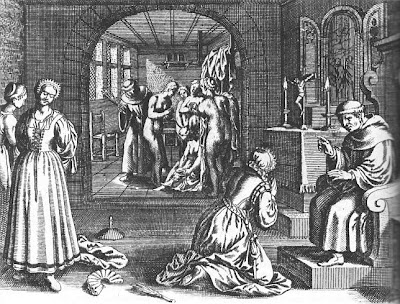