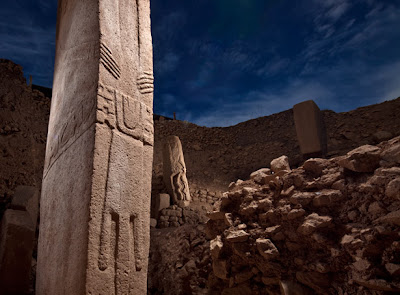 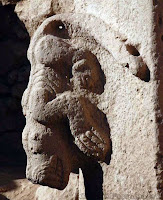 I watched a fascinating documentary yesterday on the GÖBEKLI TEPE archaeological site in Turkey. This is a 12000 year old temple complex which is far more advanced in design, art and technology than anyone had previously believed possible for a hunter gather society. The site is immense, covering at least 25 acres. Within the site are a series of round temples (between 30 and 100 feet wide) with six foot high walls. Within the walls and standing alone in the centre of the circles are megaliths, nine feet in height. On the top of the megaliths are placed massive stone lintel type blocks. The megaliths have surface carving that indicate that they are meant to represent the bodies of people and there are also exceptionally fine carvings of animals standing out from the megaliths.

It seems certain that when the temples were built there was no agriculture, but the demands of running the complex led to the invention of agriculture and the building of cities. This completely turns the previously accepted chronology of human cultural development on it's head. Previously, it had been assumed that the discovery of agriculture led to the building of cities and the invention of religion. Göbekli Tepe shows that religion came first. That agriculture, civilisation, technology, writing and science came about because man first believed.

Oh dear, Mr Dawkins. It would appear that it is not just your enormous wealth that is the direct result of the religious practices of the faithful over the millennia. Your entire career, all the science that you worship as your deity, would not exist exist if it wasn't for us god-botherers.

And there is a serious side to this. If our culture came from the religious tendency of our race, what happens when some fool kills religion? In my opinion it will be "goodbye culture." And we have proof of this. The only great art that came out of the atheistic, communist states during the 20th. Century was produced by artists who, usually secretly, believed the regimes to be stifling of all true creativity because of their mechanistic view of humankind. 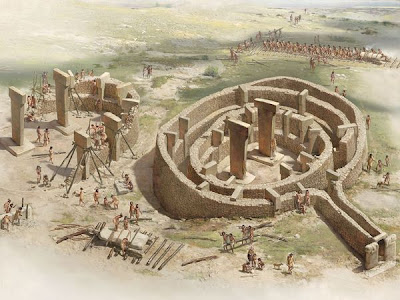