Austria's cardinal has overruled one of his priests and is allowing a gay Catholic to serve on a parish council.

Florian Stangl lives in a registered domestic partnership. The 26-year-old was overwhelmingly elected to the council recently, but it was overruled by the priest - a decision initially backed by the archdiocese. Such councils include lay people and discuss local church and parish affairs.

Cardinal Christoph Schoenborn changed his mind over the weekend after hosting Stangl and his partner for lunch, declaring Stangl to be "at the right place." Despite his close ties to his one-time professor, Pope Benedict XVI, Schoenborn has voiced an open mind to such taboo issues as priestly celibacy.

For daring to change his mind and being in the right place himself, Christoph is our:

Thanks to Susan for sending this story in. 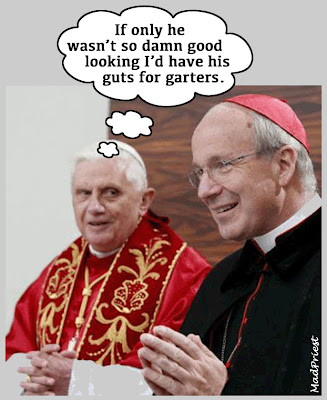