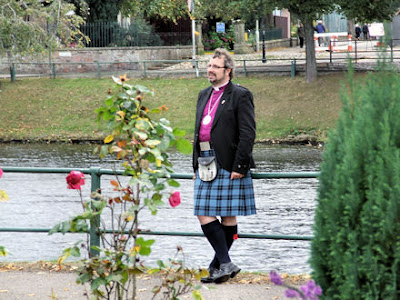 The Church of England will have female bishops very soon, which means it is only a matter of time until we have a female Grand Tufti. So why not get everyone used to the idea with a few years of a man in a skirt in charge?

Bishop Mark Strange is a holy fool with a plan that might just work. He gets totally embarrassed if put on a pedestal and likes nothing better than getting down to the grass roots and doing some actual work. If nothing else, if he gets the job it will be a laugh. 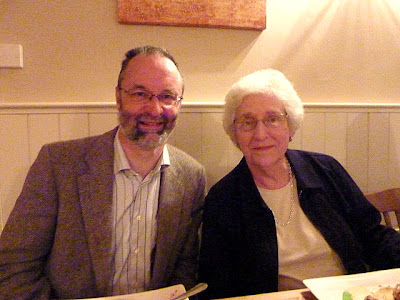 Blogging Bishop Alan Wilson (on left in photo) is everybody's darling. Colossus of the internet tubes, he actually lives in the present day and is not scared stiff by talk of wirelesses and valves and other modern technological inventions. Anyway, why shouldn't we have a nice person in charge for a change?

Bishop Alan has the distinct advantage of having met Grandmère Mimi (The Kingmaker).

Bishop James Jones (the sixth Beetle) is currently running the Liverpool franchise and a very good job he is making of it too. It is not unusual to have a person of James' high intellect in Lambeth Palace. What would be a precedent is having a clever bloke who people can understand when he says something. It would be completely unique to have an archbishop who will happily change his mind on issues (heck, it's a rarity among priests of any order, full stop).

It is likely that the next Tufti will be of an evangelical persuasion. If it has to be let it be Bishop James.

Bishop David Chillingworth (on left in photo), presently Grand Stove of All Scotland, is a diplomat of the highest order. Anybody who can pastor a parish stuck in the middle of one of the worst areas for sectarian nastiness in Northern Ireland for eighteen years and not get himself killed by one side or the other, is a man who can be trusted to diffuse an atomic bomb. Diffusing the troubles in the Anglican Communion should be a piece of cake for him. 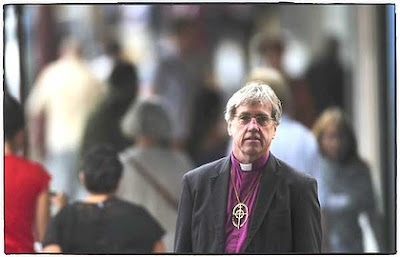 Bishop John McIntyre of Gippsland Diocese (Australia) stood up to the Head Of The Family firm recently and definitely bested the old bigot in the media kuffufle that followed his appointment of a gay priest in his own diocese. A good scrapper with a heart for inclusiveness, he qualifies for the appointment as he is a citizen of the Commonwealth. 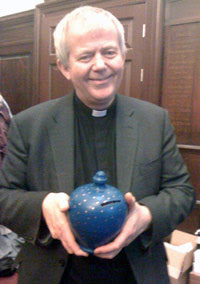 Bishop Nick Holtam (Salisbury) is a former vicar of St. Martin In The Fields, which indicates that he is of the right sort as far as this neighbourhood is concerned. He was the first member of the House of Bishops at diocesan level who came out against the Covenant. He studied geography at university which will no doubt come in useful as he will be spending most of his time, if appointed, flying around the world for photo ops and "conferences" in warm, exotic locations.

No doubt, you lot will have your own suggestions and I would love to hear them. Do bear in mind that this is a serious post (honest) and so your choices will have to be male, Anglican and a British citizen or citizen of a commonwealth country (tough luck, Americans, but you can't really complain with your "president must be born in the USA" rule, can you?).