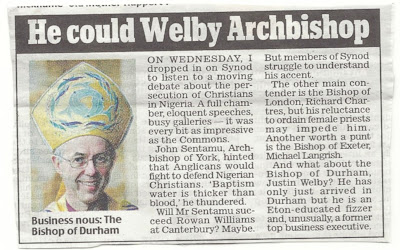 I am not suggesting for one moment that those who end up with the top jobs in my country, who come from privileged backgrounds, are not qualified for the posts they hold. The prime minister of the UK, David Cameron, went to the same school as the present bishop of Durham and, although I am an unreconstructed socialist and do not agree with his capitalist ideology, I happen to believe he is the greatest prime minister of my country in my lifetime. I believe that he is eminently qualified for the job. I have the same view (so far, as it's early days) in respect of my present bishop. It is unlikely that I would agree with many of his theological beliefs but he seems competent enough for the post and may well turn out to be one of our best (although he does have Bishop Jenkins as a spectre hovering behind his shoulder and David is a tough act to follow, especially by somebody personally connected through much of his life to the capitalist venture).

The problem is this, the greasy poles of the various hierarchies of my society are far, far greasier at the bottom than they are at the top. Therefore, people who are already half way up the pole because of the accidental privileges of their parentage, have an incredible advantage over those people, who are equally qualified, but whose parents couldn't afford to send them to a posh school or had been born on the wrong side of the British class system tracks.

However, the privileged who attain high office do have a problem, especially if they have a normal human conscience. They have to live with the fact that bolshie oiks like me will automatically assume they got their job because of who they know and who they went to school with. That must be both frustrating and annoying for those private school / Oxbridge educated occupiers of high office who actually worked hard and deserve their position.

A lot of rich and powerful people are either devoid of empathy for those they rule it over or have justified their privilege to themselves in such a way that makes it bearable. But that can't be true for all of them. It is obvious from Cameron's attempts to be seen as "of the people" that his background embarrasses him to some extent, and Bishop Welby's enthusiasm to get his hands dirty preaching the good news in some really nasty places of extreme poverty, shows that he has tried to distance himself from the spoiled rich.

The question I am left asking is this: can people like David Cameron and Justin Welby ever escape the destiny of their position in our class system? Justin's rise through the church hierarchy has been meteoric by normal standards and I very much doubt that this was due to his own politicking or playing the old school tie card. It is my guess that it had a lot to do with the expectations of those around him with the authority to offer him preferment. I don't think the English have ever got over their medieval deference to the fighting estate and the lords of the manor. The journalist's comments in the newspaper clip at the top of this post pretty much sum up the attitude of most English peasants. The Bishop of Durham went to Eton and was something big in the oil industry, therefore, he is an obvious choice to be the next (or subsequent) Archbishop of Canterbury. The journalist obviously believes there is nothing he or she can do about that, it's the way things are. It is also obvious that the journalist believes there is nothing Justin can do about it either.

Some are born great; the rest of us have to knife our colleagues in the back and have the Machiavellian indifference to other human beings of Vlad the Impaler, in order to achieve the same greatness.