As most of you will know by now (well, those of you who give a toss will know), six English dioceses voted on the proposed Anglican Covenant over the weekend. Ripon and Leeds, Southwark, Worcester and  Bath and Wells voted against it and Carlisle and Coventry voted for it. This brings the running total to seventeen against and ten in favour.

There is quiet confidence within the anti-covenant camp but they are not counting their chickens yet. There are plenty more results to come in and it could still go either way. The pro-covenanters have the propaganda machinery of the church at their disposal and we saw in Williams' recent video appeal on YouTube that they are not adverse to taking full advantage of it. We do not know what lengths the Archbishop of Canterbury will go to to make this issue personal and persuade the dioceses yet to vote that voting against the covenant would be an attack on his leadership and personal integrity. 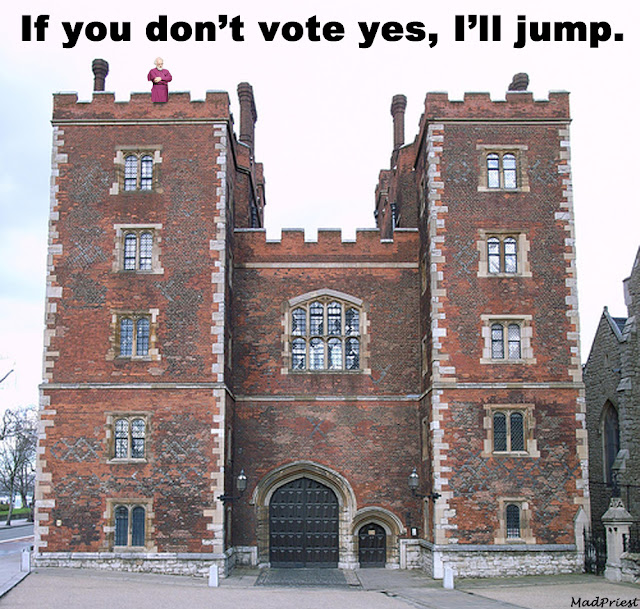 One thing is certain, however the vote now progresses, there is no overwhelming mandate within the Church of England for the Anglican Covenant. I very much doubt that the percentage in favour, even if the ayes win it, will be anywhere near the percentage required by General Synod to pass the ordination of women legislation and it would be totally wrong to allow the adoption of a binding covenant on a vote less demanding of a substantial majority than that one was.

If the result is no to the covenant, nobody is going to leave the Church of England because of it. If the result is yes to the covenant, although I don't foresee a mass exodus, I do foresee a decisive and antagonistic splitting of the church into its present two main factions, evangelicals and everybody else. Carlisle is an extremely evangelical diocese, very protestant in its ethos. It's almost a no go area for non-evangelical priests. Coventry, although once a bastion of enlightened, socially concerned thinking and practice, is now under the thumb of a Fulcrum bishop with a loyal retinue of evangelical priests now in place in the diocese. There is no doubt that, although it is not complete, one of the main splits in regard to attitudes towards the covenant is between the evangelical party and the broad church party within the Church of England. This warring between these two parties has been going on for centuries. At times one party has had the upper hand over the other but neither has been allowed to completely dominate the governance of the church because of the way we make our appointments and do our politics. But the covenant is heavily biased towards only allowing change approved by evangelical provinces within the Anglican Communion. Its adoption would give the evangelical party in England far more power than any party has ever enjoyed. They would get to call the shots until the provinces of GAFCON see the light, and that may never happen. This dominance of the English church by evangelicals will gradually wear down the loyalty to the church in everyone who is not evangelical and the demise of the Church of England as a catholic (small c) church will be certain and quick.

The other split on the vote is (again) obviously between the bishops and the rest of the church membership. In those diocese which have no definite party allegiance but have voted yes it has been the forceful rhetoric of the bishops that has swung the vote in favour of the covenant. If the bishops were to continue to insist on the adoption of the covenant without an overwhelming mandate to do so, this split will become problematical for both the church membership and the bishops themselves. At the moment most commentators are blaming the bishops' almost unanimous support of the covenant on their sense of collegiality and, more so, their loyalty to Rowan Williams. Most diocesans dream of becoming an archbishop and I doubt if they would wish to lessen the authority that archbishops enjoy just in case they do end up with the job. But, if they persist in their support of the covenant even when half of the church membership does not want it, then other explanations of their attitude may become popular. Chief of these will be the belief that the covenant is a way of giving the top of the church hierarchy far more power than they enjoy at present. I would bet my bottom dollar that, if the covenant is adopted, it won't be long before decisions regarding what changes can happen in the Church will be made in the "instruments of communion" and decision making bodies inhabited by primates and bishops alone. When that happens, General Synod will lose virtually all its legislative power as motions coming up from the grass roots will be vetoed by the house of bishops if the proposed changes do not suit them. All the bishops will have to do is quote the covenant. Maybe General Synod will still get to vote on what type of biscuits are served with their mid-morning coffee, but that will be about all they will be allowed to do. The antagonism that this will create between the episcopacy and the rest of the church will hasten the demise of the Church of England as a protestant (small p) church.

So, if the movers and shakers of the Church of England want the church in which they get to be in charge of stuff to survive so they can carry on being in charge of stuff, I strongly suggest that they now start preparing the ground for a graceful dumping of the covenant altogether, whatever the final vote may be. The anti-covenanters have come up with the "No to the covenant, yes to communion" slogan and it seems to me that they have provided Rowan Williams and his loyal supporters with a way out of this communion damaging situation they have created without losing too much face. Then we can all go back to bickering with each other without tyranny. 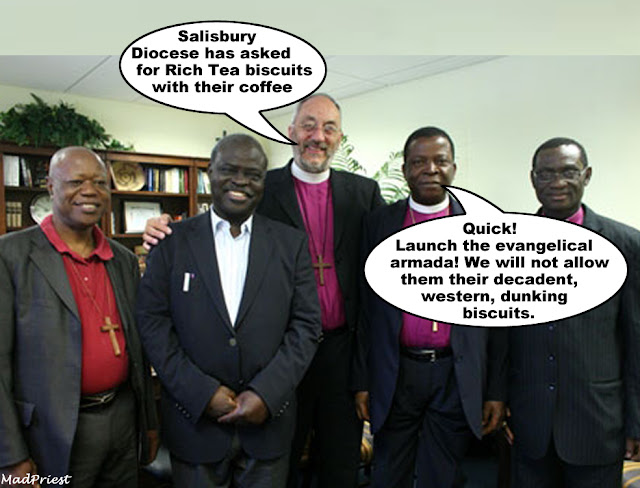