I have been unemployed for over 18 months now. After a while you sort of get used to not going out and searching the supermarket shelves for out of date mark downs. But today I am feeling down about it.

I have not bought a single item of new clothing since August 2010. Bit by bit my wardrobe is getting emptier as I throw worn out clothes in the bin. This morning I noticed a hole in the front of my favourite pullover. Tonight, I will throw it out.

It's little things like this that drain the happiness out of your life when you are unemployed. You begin to feel self-conscious when you are in public. I only have one belt now. It's brown but I have to wear it with any colour trousers I own. The same goes for shoes. I have one reasonable pair left and they are brown. I hate wearing shoes that don't match my clothes.

I'm not a greedy person and have never tried to gain great wealth or even earn more than I need to live on and have a good time occasionally. But it would be nice to be able to buy a replacement sweater when I need one. I am depressed because, as far as I can see, this will not happen before I die. The fact that I am certainly not alone in my developed world poverty just makes me more depressed.

Being unemployed is like living on death row. A boss who removes a worker's livelihood is stealing that person's life away and it is time that can never be replaced. 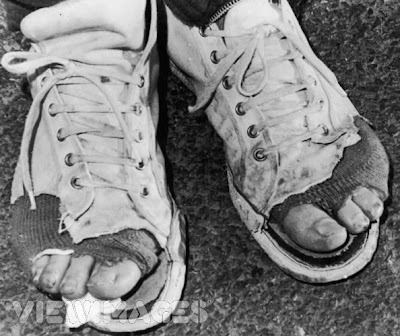 There is a budget coming up in England soon. The main arguments going on at the moment concern the taxation of the rich at a higher rate than the poor. Over and over again the defenders of unrestricted capitalism tell you that if you don't let bosses earn loads of money then there will be no wealth creation and no jobs for everyone else. But why should this be so? Is it really true that people are only inspired to create wealth if that wealth is going to go mainly to themselves?

There was a time in England when great men and women devoted their lives to enriching as many people as possible. I'm thinking of the Cooperative movement and the rich entrepreneurs who gave their wealth away because they believed that they wouldn't go to heaven if they died rich whilst others starved. This wasn't that long ago. We still have the public libraries built by philanthropists and the houses built by Cadbury for his workers in Bourneville still stand.

They say that if there wasn't a God, human beings would invent one. I truly believe that the killing of God in the last fifty years or so, has led to a world where there is no reason for generosity and communal endeavour. At the end of the day, no matter how much the atheists talk about godless morality, it does appear from empirical evidence that the only thing that compels the rich to give to the poor is the image of that proverbial camel trying to squeeze its great bulk through the eye of a needle. There are, of course, exceptions to this rule, but they are few and the atheists who do pursue a truly benevolent way of life tend to be pretty damn poor themselves.