The Episcopal Church in the United States, as part of their, so far unsuccessful, attempt to completely dominate the Lambeth Conferences and, very successful, attempt to get a mention every day on the Anglican Communion's prayer list, has created a diocese for every five members of their denomination. This is just the official church. When you factor in all the schismatic, Anglican churches, the figure is nearer one diocese per two members of the laity. Therefore, over my six years of blogging at America I have witnessed, at a distance, an innumerable number of episcopal elections. At the moment there seems to be, at least, one a week being announced.

I don't pay much attention to them because I don't like the X-Factor nature of them. But I did once give my full backing to one candidate - a nice man called Mark, who never stood any chance of winning the mitre for the simple reasons that, well, he is a nice man and most of his friends are in exceedingly low places rather than the high places normally demanded of bishops' friends in the Anglican Communion.

Today, is an exceedingly sad day because I am going to completely scupper the chances of another nice man, fully competent for the task, of getting the nod to the Rhode Island episcopal throne. The poor man, who really doesn't deserve this kiss of death, is the Very Rev. Nicholas Knisely, dean of Trinity Episcopal Cathedral, Phoenix, Arizona. I like him because he buys my book every month. I am giving him OCICBW...'s full backing because, if he gets the bishop's job, he'll probably have no need to buy my book anymore, and I don't want that. 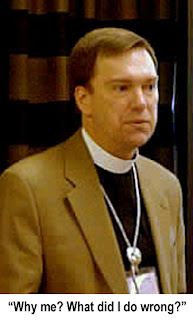 To make absolutely certain that Nick doesn't get a look in, Grandmere Mimi is also backing him with a hearty "Go Nick!" on the barely legal, anarchist blog, WOUNDED BIRD.

Poor Nick, he doesn't stand a chance. It's so unfair.

The big day itself is Saturday, 2nd. June.

So, at least, Nick has a few months in which distance himself from his multitude of unsuitable fans.