Wearing a cross is just a “religious decoration” for many people and not an essential part of Christianity, the Archbishop of Canterbury has said. He said it had become something “which religious people make and hang on to” as a substitute for true faith.

"The cross itself has become a religious decoration.”

He made his comments on the day it emerged that the Government is to argue in the European Court that Christians do not have the “right” to wear a cross as a visible manifestation of faith.

I am sure there are many non-Christians who wear a cross purely for secular decorative purposes but that can never be the case for a believer. Once you are aware of the symbolism involved in an object the wearing of it becomes a public statement concerning that symbolism.

I rarely wear anything that sets me apart as a Christian anymore. But when I was a priest in the Church of England I used to wear my clerical shirt with dog collar whenever I was on work time. I was insulted in the street because of this but I was also approached in the street by people actively looking for God and my dog collar made the statement that I was willing to help them and that I was not ashamed to be identified as a Christian.

Back when I was at senior school I used to wear a badge declaring my love of God. No way was that a fashion statement because my school was not the sort of place that you advertised the fact that you were a Christian if you didn't want to be bullied and excluded. I was making the statement that I would rather be thumped than deny my faith. 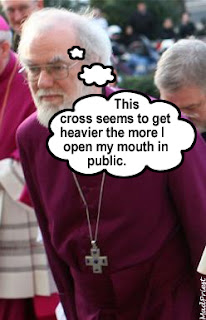 This belittling by the Archbishop of Canterbury of ordinary, working class Christians who live and work in the real world and not behind the protecting walls of Lambeth Palace, is yet another example of how distant he is from the people he is supposed to serve. If he had spent a bit more time walking round the streets of a parish talking to people instead of hiding in stuffy libraries and diocesan offices all his priestly life, Rowan Williams would have a better understanding of what working people actually think about stuff and he wouldn't be so patronising and plain wrong.