Barbara Bagley says she never gave up hope that her dog would be found alive in the Nevada desert after the animal bolted from the scene of a crash that critically injured her and killed her husband. But the Salt Lake City woman endured plenty of frustration until her beloved 4-year-old Shetland sheepdog, Dooley, was tracked down Feb. 18 after surviving 53 days in the wild on roadkill and scattered ranch water sources.

The Dec. 27 single-vehicle accident on Interstate 80 near Battle Mountain, about 225 miles east of Reno, sent Bagley and her 55-year-old husband, Brad Vom Baur, to the hospital in critical condition. Their other sheltie, Delaney, was killed in the wreck. Dooley ran away and vanished.
Bagley, 48, suffered a concussion, broken ribs, a shattered wrist and two punctured lungs. As soon as she mustered up enough strength, she turned her attention to a search for her dog in the sprawling sage-covered plains and hills of northeastern Nevada. Realizing what Dooley could mean for her recovery, dozens of Nevada volunteers responded to a Facebook plea for help in looking for him. But the search was canceled before it began after the Jan. 6 discovery of what appeared to be the dog's remains along the interstate. The same day, her husband died.

"It was a horrible day for me," Bagley recalled. "But something inside me told me Dooley was still alive out there. I wasn't 100 percent sure, but I didn't grieve for Dooley like I did for my husband and our other dog."

More than three weeks later, Bagley's spirits were buoyed after a woman reported spotting "a Lassie-type" dog near the accident scene. A subsequent search joined by Bagley turned up nothing, but a railroad crew spotted a dog matching the same description in mid-February in the same area about 15 miles east of Battle Mountain.

Further searches netted a positive identification of Dooley but frustration as well because the skittish dog kept fleeing from Bagley and other searchers. Finally, Shannon Sustacha of Lamoille, who was on horseback, and a Bagley friend driving a Jeep cornered Dooley only five miles from the crash scene. The friend managed to nab the sheltie and put him in the Jeep.

An ecstatic, tearful Bagley arrived at the scene a short time later.

While Bagley is still going through the grieving process over her husband's death and recovering from her injuries, Dooley's presence has picked up her spirits immensely.

"He's the physical and mental affection that I need to recover," she said. "I owe him so much for the hope I have now and the renewed faith I have in prayer. Dogs are so great because of their unconditional love." 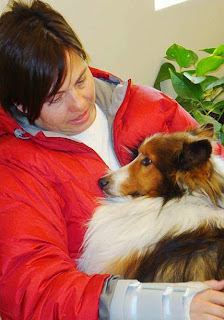 COMMENT: This is a sad/happy and beautiful story but the survival of the little Sheltie doesn't overly surprise me.

Any dog bred to put up with the weather on the Shetland Isles is going to be able to take a couple of months lost in the Nevada desert in its stride.

They're cute and tiny but they're also tough little dogs.

Thanks to IT for this story.