The Very Rev Dr David Ison, who was appointed as the new dean of St. Paul's Cathedral by the Queen this week, said the church should welcome gay people wanting to take on the virtues of marriage, such as faithfulness.

"We need to take seriously people's desire for partnership and make sure that the virtues that you see in married relationships are available to people who are gay," he said.

Ison told the Times that there was a problem of "word definition" about gay marriage because of the history and the tradition of the church. He added that it was more helpful to talk of "Christian marriage" than homosexual or heterosexual unions.

He added that gay couples should also be allowed to adopt children: "I think that ... anyone who can provide a loving, stable, caring home should be able to adopt."

Asked whether the government was right to change the law on gay marriage, Ison said a commitment to being together was "the best pattern for how to flourish if you're going to be in a relationship ... whether you're gay or straight."

He added: "Marriage doesn't belong to the Church."

My goodness! How did that happen? Just when you think you've got the Church of England sussed they go and do something completely out of the blue that reminds you that it is all about God and love and stuff rather than politics and swanning around the world on the weekly offerings of the faithful.

Hey! I hardly dare to say this out loud as it is seems like an impossible dream at this precise moment in time, but hows about David Ison becoming Archbishop of Canterbury in the not too distant (please, God) future?

In his previous position as dean of Bradford Cathedral, Ison conducted ceremonies to affirm and pray for gay couples civil partnerships. He said he would be happy to do the same at St Paul's. 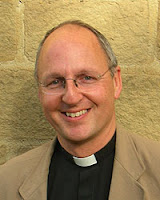 For being a candle
lighting up the darkness,
the Very Rev Dr David Ison
is OCICBW...'s:

BRICK OF
THE DAY