What about this for episcopal double speak (O'Brien is referring to the English government's plans to legalise same sex marriage):

Cardinal Keith O'Brien, the leader of the Catholic Church in Scotland, said the plans were a "grotesque subversion of a universally accepted human right." 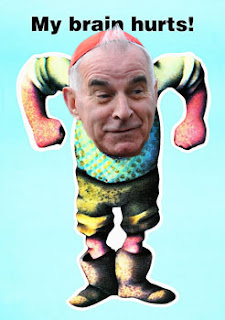 It's not just Cardinal Gumby's brain that is hurting. My brain is in serious danger of complete melt down if I carry on trying to make sense out of that one.

Oh, and there's more. The "If I'm not allowed to do it then I am damn well going to stop you doing it" brigade have obviously had enough of comparing equality for gays with Nazism. O'Brien has decided on a new slur. According to this particular celibate, same sex marriage is the same as owning slaves.

"Imagine for a moment that the government had decided to legalise slavery but assured us that 'no one will be forced to keep a slave'. Would such worthless assurances calm our fury? Would they justify dismantling a fundamental human right?"

What a nasty little man.