I think it may be time to go back an re-educate them again. It obviously didn't completely take the first time.

Bavarian police chiefs are ordering thousands of racist and tasteless calendars printed by the police union be taken down from the walls of cop shops across the state – a full two months after the German media pointed out its faults.

One cartoon shows a black man drawn with a flat head, exaggerated musculature and big red lips literally spitting as he is held in a police station by a slim blonde officer and shouts at another white officer. 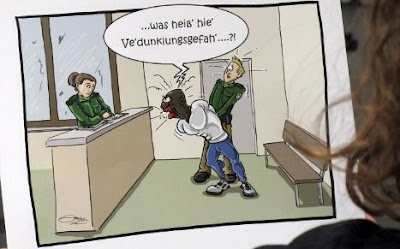 The dark-skinned arrestee is asking: “What’s the danger of suppressing evidence here?” The supposed joke is a play on the German word for evidence suppression which is Verdunkelungsgefahr - or the danger of darkening something.

The calendar has presumably been hanging on police station walls for at least eight weeks – and on Thursday cops across Bavaria would have turned the page to March to find that offensive cartoon.

They have already had a month of looking at grotesque caricatures of two middle-Eastern with massive hooked noses, and another black man with huge red lips, representing the three wise men. They are being told by another normal looking pair of white Bavarian police officers that they must pick up the droppings of their camels. The black man is already on his knees doing so. 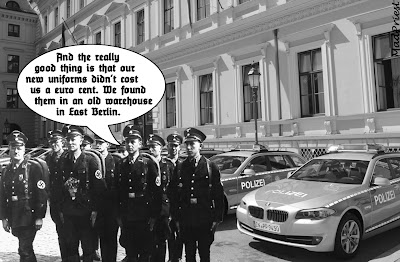