BBC director-general, Mark Thompson, has admitted that Christianity is treated with less sensitivity on air than other religions. According to the Daily Mail, in his interview with Timothy Garton Ash for Oxford's Free Speech Debate, Thompson said that television programmes do not have to be as sensitive with satire, jokes, or comments about Christianity because the religion is "an established part of our cultural-built landscape" and "pretty broad shouldered."

Thompson went on to say other religions closely "identify with ethnic minorities" and therefore warrant special regard when being dealt with on broadcast television.

"The point is that for a Muslim, a depiction, particularly a comic or demeaning depiction, of the Prophet Mohammed might have the emotional force of a piece of grotesque child pornography," he said.

COMMENT: Thompson is not being respectful to non-Christian religions, he is being fearful of them. He also gives the green light to fundamentalists of all religions to resort to violence when they feel they are being disrespected.

The only way to show respect to non-Christian religions is to respect the Christian religion with as much sincerity and care. Otherwise you are just being patronising to other religions. "I respect you because I'm scared of you," is just another way of saying, "You are an uncivilised barbarian." That is hardly respectful in my opinion.

Proud as I am of belonging to a "broad shouldered" religion, I must admit it pisses me off that England's trendy media have used it as an excuse to bury us with a sustained campaign of attrition. I'm not saying that we should have reached for our handguns at the first sign of their disrespect. But perhaps Archbishop Ramsey should have gone round and blackened the director general's eye. 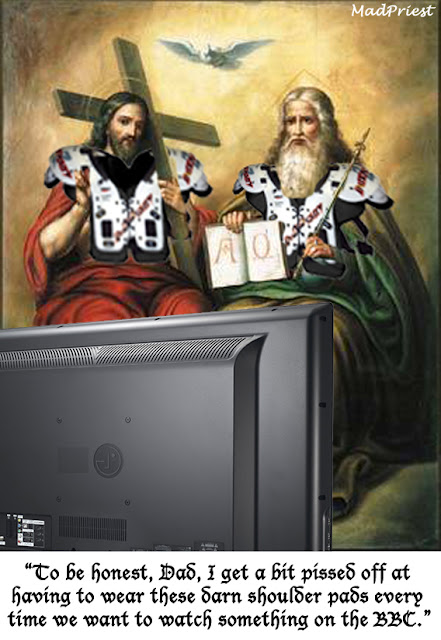