Westminster Kennel Club Dog Show (U.S.A.) has fired its TV sponsor of the past 24 years, Pedigree, because Pedigree's ads encouraging adoption of shelter dogs were deemed too depressing.

“The feedback we got from our primary audience was that they were seeing commercials that made them want to turn the channel,” Westminster spokesman and USA network on-air commentator David Frei told the Associated Press. One of the spots Pedigree ran during past Westminster shows featured shots of dogs sitting alone in shelters. Most were mixed breeds, and the spot encouraged viewers to adopt dogs from shelters.

"Show me an ad with a dog with a smile. Don’t shame me,” Frei said. “We told them [Pedigree] that and they ignored us.”

Westminster, like virtually all American Kennel Club-sanctioned dog shows, features purebred dogs, and Pedigree Brand Manager Lisa Campbell, in an interview with Ad Age, suggested Westminster might have been uncomfortable with the ads’ emphasis on shelter dogs.

“Their long-term vision is completely focused on purebred dogs,” she said. “We are focused on all dogs.”

COMMENT: OCICBW... gives a big thumbs up for actually caring a bit about the animals they make so much money out of.

OCICBW... despairs of Frei and his poncey kennel club but isn't surprised - anybody who will cripple and deform dogs, by breeding for looks not health and intelligence, obviously doesn't give a shit about the welfare of dogs. I'd neuter the lot of them.

But our main condemnation, our "Biggest Bastard in Show" award, goes to Purina, Westminster's new sponsor, for jumping in and snatching the goodies so eagerly. I hope whoever sanctioned and delighted in that bit of business falls into a cesspit of dog poo in front of a whole rescue centre of homeless pooches. If I was there when it happened I'd shout, "How's that for depressing!" at the nasty little hypocrite. 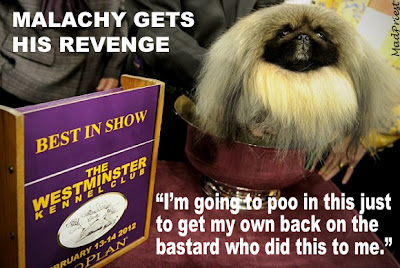