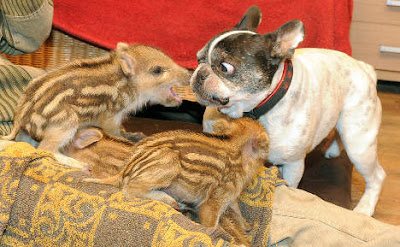 A French bulldog has adopted a newborn litter of six German wild boars after they were found cold and starving in the woods, their mother possibly killed by hunters. The eight-year-old dog, called Baby, lives as a pet at the Lehnitz animal sanctuary in Brandenburg. She pricked up her ears when the six little pigs were brought in – she has previously adopted kittens, rabbits and even a raccoon.

The piglets are still very weak and spend most of the time snuggled up next to the dog, sleeping. The dog cannot feed the pigs, which are being bottle-fed with special piglet milk enriched with fats every three hours or so by the sanctuary workers.

The new patchwork family will be allowed the run of the animal sanctuary for about three months, after which the piglets will be released into a patch of protected woodland owned by a boar-friendly associate of the sanctuary. 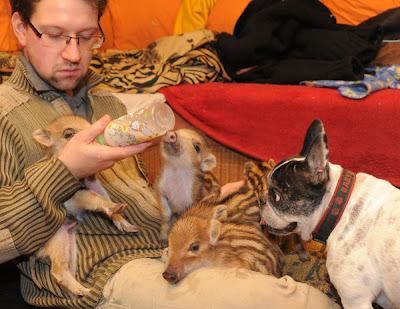