Yes. It seems that the Roman catholic hierarchy is panicking about my new subscription service, "New Words For Holy Communion." In fact, as the following article (found by Ellie) shows clearly they have decided to go with a preemptive attack to make sure that none of their drones start using their own discretion or, worse still, their imagination and commonsense.

A senior priest in Belleville Diocese, Illinois, has resigned from his role as head of the local deanery, in protest at the sacking of one of his fellow priests, for making small changes to prayers in the Mass. Father Bill Rowe, from Illinois, USA, has resigned from the parish where he has served for 17 years, after being ordered by his Bishop to read the Eucharistic liturgy exactly as it is written in the Roman Missal, instead of making small modifications, to make the prayers more understandable to his congregation.

Fr Jim Buerster has now resigned his position as Dean of the North Central Deanery in the Diocese of Belleville in protest over the departure of Fr Rowe. It seems the Deanery was not consulted over the situation, and Fr Rowe is held in high esteem by his fellow priests. 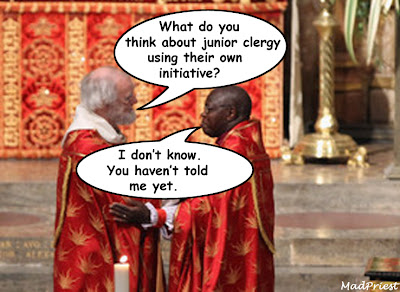