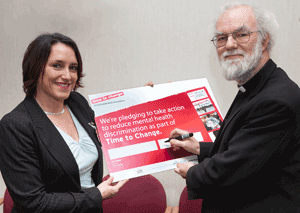 The Archbishop of Canterbury demonstrated his support for TIME TO CHANGE, England's biggest mental health anti-stigma campaign, run by the charities Mind and Rethink Mental Illness, by signing an anti-discrimination pledge at a fringe meeting during the Church of England's General Synod.

The move comes after the Church of England developed a pack to help churches run services and activity around the subject of mental health and is continuing to build support for their work, and as the Archbishop of Canterbury has expressed concern about the stigma still attached to mental health problems.

Sue Baker, director of Time to Change, said: "For many, church provides a sense of community and comfort which means it is a good place to start conversations about mental health. The Archbishop's leadership in signing the pledge will help send the message across congregations that we all have a role to play in tackling the stigma and discrimination that is experienced by people with mental health problems so regularly, even in 2012."

COMMENT: I hope and pray that this campaign will change the attitude of the bishops and clergy of the Church of England towards people with mental health problems and those who have suffered mental illness in the past. However, I am not optimistic. The attitude of the hierarchy of the church towards those with mental illness is pretty much the same as it is towards gay people. There are some clergy who do relate to the mentally ill as if they are human beings equal to themselves but, on the whole, the care that comes from the church is begrudging and condescending. They do not really want people with mental health problems in their churches and, above all, they do not want them to have any ministry whatsoever within the church. I am proof of that.

Fourteen years ago I became very ill and spent a couple of years in and out of hospital. It was a neurotic illness which manifested itself in an overwhelming fear that rendered me almost catatonic. Nothing the psychiatrists tried to pull me out of it worked. Then I met a young occupational therapist who had no interest in talking therapies. Instead we worked together on practical ways of curing my problems. It was extremely painful, it was gradual and took a long time, but it worked and after a year off work I was in a position to ease back into my full time ministry. But my bishop and my archdeacon would have none of that. As far as the bishop was concerned I had shown that I was not capable of being a priest. He had it in his head that my illness was caused by work related stress even though my psychiatrists were adamant that it had nothing to do with my workload. So I was told that there was no job for me in the church and that I had to retire at the age of forty two.

I fought this decision very hard and eventually the bishop agreed to put me on short term contracts as an assistant priest. I had to see counsellors that he appointed who would report back to him and my bi-annual reviews were completely different, far more intrusive and confrontational, than the reviews my colleagues had to go through. Every time my short term contract came up for renewal he would tell me that there was no job for me and that I should resign. I had to fight for my livelihood over and over again. After eight years of this he finally got rid of me altogether which is why I am now unemployed. Nobody from the church, least of all the bishop, contacted me after my sacking, to enquire about my spiritual and physical wellbeing. As far as the Bishop of Newcastle was concerned, it appears that I am an embarrassment best swept under the carpet. During my eight years as an assistant I did not need anytime off for any illness. An expensive report from a top teaching psychiatrist concluded that not only was I capable of being a full time priest but that I would obviously make a very good one. The diocese paid for this report and then completely ignored it.

And, of course, the stigma of mental illness travels with you. We moved diocese to get away from the bishop who had successfully ruined my life because of, what I guess, was his own fear of mental illness and the people who suffer from it plus his ignorance about the capabilities of the mentally ill. I made contact with my new bishop and had a wonderful hour or so chatting with him. If I could have started afresh I am positive that I would once again have a ministry in the church. But bishops talk to each other (off the record) before making decisions and, as the conditions that my new bishop is insisting on are extremely similar to the "special" conditions imposed on me by my previous bishop, I assume that my new bishop is more inclined to believe his colleague's account of me than my own. The thing that hurts most of all is the suspicion. I have to jump through hoops again to prove that God has called me to a priestly vocation and "the situation" will be reviewed at the end of the year. I feel like a prisoner on parole than a priest in good standing within the church I have belonged to and served all my life.

So, as I said, I fear that the important people in the Church of England will pay lip service to the requests from the mental health charities and they will sign all the bits of paper shoved under their noses whilst the press are watching. But behind closed doors they will continue to believe that those who suffer from mental health problems are weak, potentially dangerous people who should be kept away from the "normal, sane" members of "their" church at all costs. 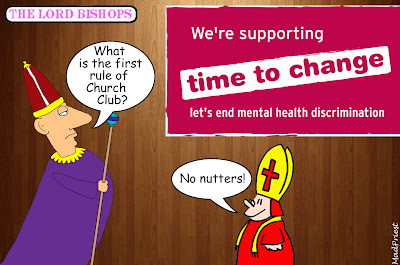