In honour of The Queen's Diamond Jubilee, OCICBW... has today announced a new award which will, no doubt, become as internationally coveted as BRICK OF THE DAY.

The new accolade will be known as THE MIMI and will only be awarded to sweet, little, grey-haired, old ladies with spunk.

The first recipent of this major gong is Joan Clark of Braughing, Hertfordshire, England.

From THE HERTFORDSHIRE MERCURY: 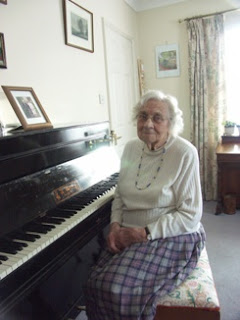 After 84 years of working as a church organist, 95-year-old, Joan Clark has retired from her job. To mark her retirement, Joan received a personal letter from the Archbishop of Canterbury, Dr Rowan Williams.

More than 300 friends attended a celebratory service held for her at St Mary the Virgin Braughing, where she was presented with a long-service medal from The Royal School of Church Music, a certificate, an engraved rose bowl, flowers, a cake and an autograph book signed by her many friends.

Mrs Clark started playing the organ at the Congregational Chapel when she was 11-years-old.

Well done, Joan. Putting up with Anglicans singing hymns badly for that number of years shows either extreme fortitude or profound deafness. As we assume the former in your case, you are hereby, deservingly, added to THE MIMI hall of fame.