The bloody Vikings are at it again. In Norway, the government has agreed to allow officially licensed psychopaths to kill 157 cats this year. There are only about 470 elusive lynxes in Norway, one of the world's most underpopulated countries, and yet the human inhabitants find it impossible to share it with the wildlife who were there before they arrived. It's not as if they eat the cats as Norwegians live on a diet of open fish sandwiches and nothing else.

Meanwhile in Sweden a hunter has the audacity to complain that being attacked by a bear his dog had just woken up from hibernation was like "a slaughterhouse." Yes, well now he knows what it feels like to be an inedible, furry non-human in Scandinavia. The bear has been duly punished for being disturbed by a man intent on killing him. Police gave orders for the bear to be tracked and killed, and the municipality’s specialist hunter with the help of local hunting teams succeeded to fell him on Sunday.

Here's a photo of the dead bear which will now never wake up from hibernation ever again. Human beings are bastards. 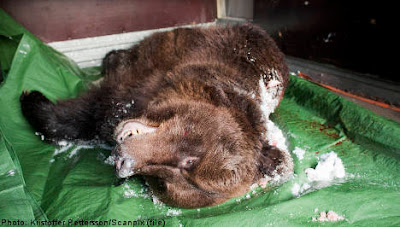