A 31-year-old woman who is serving a life sentence for murder in a Swedish prison has demanded that she be allowed to take out holiday days. In February 2010, Natalia Pshenkina was transferred from a prison in Hinseberg to a facility in Ystad in southern Sweden where she took a job inside the prison. Now, after nearly two years on the job without a break, Pshenkina thinks she is due some time off.

“I've asked the head of production about which times during the year the prison allows vacation time for inmates. The answer was that the prison doesn't have any vacation time at all,” she wrote in a complaint filed with Sweden's Chancellor of Justice.

Pshenkina closed her complaint by claiming she is due compensation for the paid vacation days she's been denied over the last two years, arguing her job is covered by laws guaranteeing Swedish workers the right to 25 days of paid vacation per year.

But Swedish Prison and Probation Service (Kriminalvården) spokesperson Anders Annerfalk explained that inmates are covered by different laws than those governing the employment conditions of normal Swedish workers.

"They aren't employed by us and therefore laws about vacation time don't apply” he said."

COMMENT: Now, where have I heard that "They aren't employed by us" excuse before? 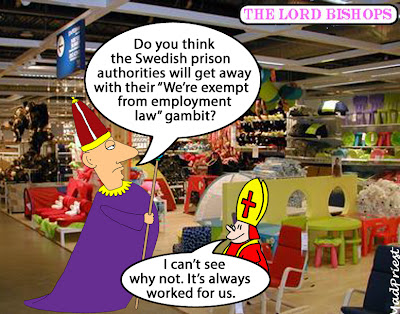