From THE LOCAL (Norway):

With the annual topless tobogganing world championships just two months away, the competition’s Norwegian organisers believe it’s time for the sport to get its own national arena.

“Ski jumpers have Holmenkollen and track and field athletes have Bislett. Our hill facilities should be the national arena for naked tobogganists,” championship architect Sten Hansen told national broadcaster NRK.

Hansen, the self-styled “topless general”, expects the number of participants and spectators to set new records when the tobogganists disrobe for this year’s competition on March 17th. For the first time, the competition will include categories for the fastest women and men, as well as a special mention for the best winter body.

COMMENT: Best winter body?! At last! A competition I stand some chance of winning.

OCICBW... readers wanting to enter this year's contest should, in the first instance, send their application forms through to me along with a photograph clearly showing their credentials. I will then pass them on to Sten. Honest. 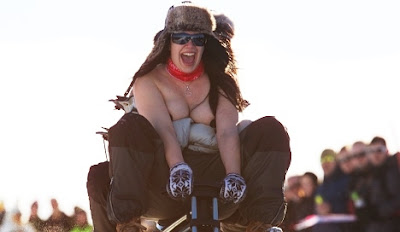