In a letter published late Friday on the Seattle archdiocese’s website, Washington State’s four Catholic bishops call on members of the faith to contact lawmakers and urge them to “defend the current definition of marriage.”

The bishops say that only heterosexual marriage should be legally recognized because it is “related to bringing children into the world and the continuation of the human race.” There are “forces already undermining family life today,” and recognizing other unions would exacerbate the situation, they write. They also say that limiting marriage to straight couples “does not depend on anyone’s religious beliefs” and that this definition of marriage “is grounded not in faith, but in reason and the experience of society.”

COMMENT: Bloody 'ell! If the Roman Catholics are going to start resorting to reason and citing experience they are going to bugger themselves as far as same sex marriage is concerned. In fact, they could end up with no Roman Catholic Church whatsoever. I mean, if you get rid of the unreasonable stuff from Roman Catholicism what have you got left? Christianity, I guess, but their present leadership don't seem too keen on that. 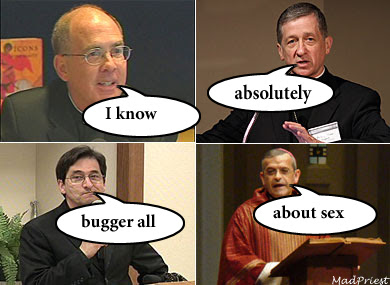