A new biography of the Queen reveals for the first time her despair over the divorce of Prince Charles and Princess Diana, and the Monarch’s fears that her eldest son was about to ‘throw everything away’. In "Elizabeth The Queen," by Sally Bedell Smith, the former Archbishop of Canterbury, Lord Carey, recalls the moment that the Queen finally confronted the problems in her son’s marriage. He reveals she was terrified that history was about to repeat itself – that Prince Charles would give up his place in the line of succession for Camilla, just as King Edward VIII gave up the throne in 1936 to marry his mistress, Wallis Simpson.

Lord Carey says: "There was a moment when we were talking very candidly about divorce. I remember her sighing and saying, 'History is repeating itself.' I saw despair. What she was talking about was the Duke and Duchess of Windsor. She was concerned that if they divorced, Charles would marry Camilla. She thought Charles was in danger of throwing everything out of the window by rejecting Diana and forging another relationship."

But Lord Carey advised the Queen that Prince Charles’s relationship with his wife was beyond repair. He says: "The personalities were so different. The Queen understood that. She could offer support and put them into her prayers."

COMMENT: Erm? Isn't there something about priests and confidentiality. Heck, surely it's required of any professional, especially those in caring occupations. 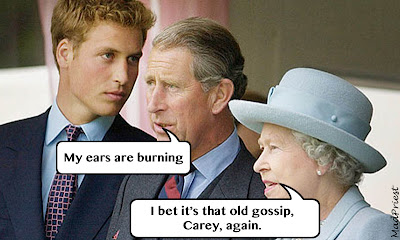