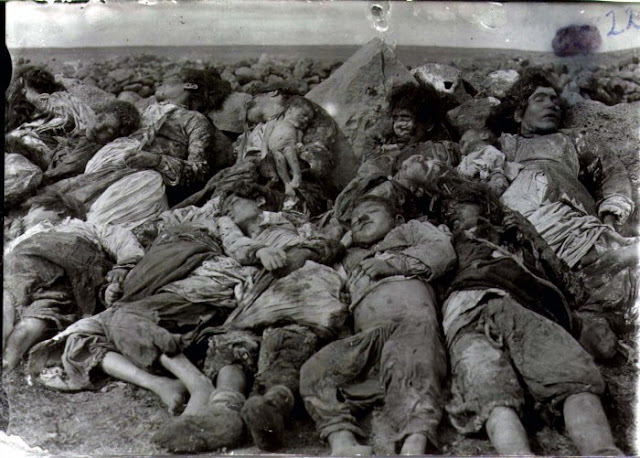 The Armenian Genocide, also known as the Armenian Holocaust, the Armenian Massacres and, by Armenians, as the Great Crime, was the deliberate and systematic destruction of the Armenian population of the Ottoman Empire during and just after World War I. It was implemented through wholesale massacres and deportations, with the deportations consisting of forced marches under conditions designed to lead to the death of the deportees. The total number of resulting Armenian deaths is generally held to have been between 1 million and 1.5 million. Other ethnic groups were similarly attacked by the Ottoman Empire during this period, including Assyrians and Greeks, and some scholars consider those events to be part of the same policy of extermination.

The starting date of the genocide is conventionally held to be April 24, 1915, the day when Ottoman authorities arrested some 250 Armenian intellectuals and community leaders in Constantinople. Thereafter, the Ottoman military uprooted Armenians from their homes and forced them to march for hundreds of miles, depriving them of food and water, to the desert of what is now Syria. Massacres were indiscriminate of age or gender, with rape and other sexual abuse commonplace. The majority of Armenian diaspora communities were founded as a result of the Armenian genocide. (WIKIPEDIA)

It was the first modern genocide, in fact the term was coined to describe it. Yet the Armenian people have never had their suffering truly acknowledged by the world community because both Turkey and Israel have a policy of vehemently denying that an act of genocide took place (Turkey, as the successor of the Ottoman Empire, for obvious reasons and Israel, because they do not want the word "genocide" to describe anything other than the Holocaust as they feel it would lessen the uniqueness of their suffering as far as the rest of the world is concerned). On the whole, other countries have selfishly kept  very quiet about the atrocity for strategic, military and diplomatic reasons. Turkey has been a very useful ally of western governments  since the birth of the state of Israel and, traditionally, western governments are fearful of upsetting the Israeli government. They are, of course, applying the same double standards here as they are currently applying in their relationships with human rights ignoring China.

I applaud the French government's recent decision to join nineteen other nations in officially recognising the Armenian Genocide. But it is not enough. In fact, no piecemeal recognition of the atrocity will ever be enough. What is more it is an abhorrence that the Armenian people have had to wait nearly a hundred years for healing. To make them wait for the nations of the world to one by one recognise the true nature of their suffering just adds to this obscene miscarriage of justice.

What is needed is the setting up of a commission by the International Criminal Court tasked to decide on whether or not the massacre of Armenians was an act of genocide. The commission should consist of atheists from countries not closely aligned to Turkey or Israel or predominantly Christian, Islamic or Jewish in their religion. It is extremely unlikely that any such commission would have any official status or gain worldwide recognition. But the decision of such a commission would be used by many democratic countries as a reason for them to officially concur with the findings of the commission.

And for the sake of the Armenian people and for the sake of world peace I hope that, in this case, a spade is most definitely called a spade. It is important for the Armenian people that the genocide committed against them by the Ottoman Empire is universally condemned in the same way that the Holocaust was condemned by, at least, the democratic countries of the world. It is also important that the Islamic world should be told unequivocally that their religion has been hijacked and corrupted to validate acts of supreme terror against Christians, and not that long ago. The common belief among Muslims that only they have sufficient cause for grievance gets in the way of any true reconciliation between Islam, Christianity and Judaism. It will not be until we have all publicly accepted the atrocities most of our nations have committed in the past including, most of all, the atrocities committed by our own countries, that there can be any movement towards a more peaceable world.

And for goodness sake, Israel! Letting people suffer by arguing over who has suffered the most is the most absurd stupidity there can be. Stop it!