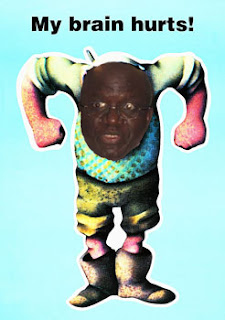 The head of the Anglican Church in the Central Africa Province, Archbishop Albert Chama, said his church does not accept gay practices. (Which I assume refers to dentists, doctors, paediatricians and all other varieties of gay medical practitioners).

Archbishop Chama said this yesterday when he presided over the Order of Epiphany at St John's Cathedral in Bulawayo. He said the church was not going to reverse its position on same sex marriages.

After the service he said, "The Anglican Church of the Central Africa province does not and will not accept homosexuals and that is our stand. The homosexuals are humans created in the image of God and the only thing we can do for them is to pray and care for them."

The Order of Epiphany service is when the church recognises the great work of individuals in its ranks who had sacrificed a lot in peace building and community.

COMMENT: To understand these blustering fools would require trying to think in the way they think. I'm simply not prepared to undergo a lobotomy in order to make that possible. So, purely in the proverbial way, bugger the lot of them! At Christmas may they get what they deserve. Me, I'm going to celebrate God becoming flesh.