A Reno-area woman says she was fired as a baggage handler at Reno-Tahoe International Airport last month after she refused to load an emaciated hunting dog on a plane. Lynn Jones of Lockwood said her supervisor told her to load the dog lying in a pet carrier because the animal's paperwork was in order and its condition wasn't her concern. But Jones, an employee of contractor Airport Terminal Services at the time, told the Reno Gazette-Journal that she couldn't put the dog on the plane for shipment to Texas because its paws were bloody and its body was covered with sores.

She said: 'Everybody who saw it, the TSA people, the airport police officers, the girls at the ticket counter, were concerned. The dog was so weak and torn up. It didn't look like it could survive the flight. I was crying. I kept saying that dog could not be put on a plane.'

She said airport police phoned Washoe County Regional Animal Services, which took custody of the dog. The animal is owned by a hunter who has it shipped to places he hunts, according to authorities. It was taken back to Texas after being nursed back to health.

Jones said she was fired on the spot on November 15, adding: '[My supervisor] kept yelling, "That's it, you're done, you are out of here, go home".'

She said her job loss has been a hardship, but she has no regrets. She held the job for more than five years.

'I just couldn't turn my back on that dog. My supervisor said it wasn't my concern, but animal abuse is everyone's concern who sees it.'

COMMENT: What! Just when you think the "land of the free" cannot possibly get more secretive and unconcerned about injustice some inbred hick legislature always proves you wrong by coming up with another draconian law to protect the guilty. Thank God that there are also people like Lynn living in the USA as well, whose integrity in putting the welfare of "just a dog" before her own livelihood has earned her the well deserved honour of being our...

Somewhere in Reno there must be an honest employer and if God doesn't put that good person in touch with Lynn Jones, and quickly, I'm going to be having words with Him. 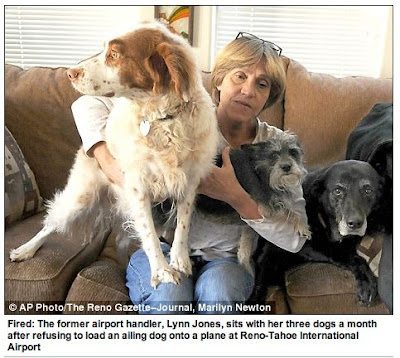 Thanks to the eternally soppy, Paul(A),
for sending this story into me
(Bless his little cotton socks).