THE WASHINGTON POST reports that "an unnamed German man" has "filed charges against 'Mr. Joseph Ratzinger' for allegedly failing to use a seat belt while touring Germany on an official visit in September."

The unnamed plaintiff, from Dortmund, argues that the pope was seen several times during the visit without a seat belt. The complaint offers several eyewitnesses, including the archbishop of Freiburg, the head of the German Conference of Bishops and the premier of the state of Baden-Wuerttemberg.

COMMENT: Those Germans are just not tough enough when it comes to law enforcement. The Americans would never have let him get away with it... 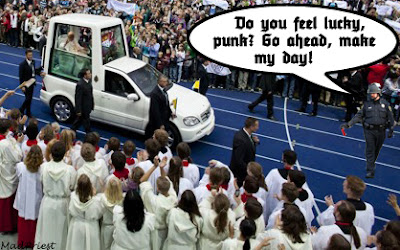