From THE SUNDERLAND ECHO:

Hundreds turned out to witness the inauguration of the Right Reverend Justin Welby at Durham Cathedral on Saturday. He has now become the fourth most senior Bishop in the Church of England (please note: in England we got rid of the threefold ordained ministry years ago and now have hundreds of orders categorised in a strictly hierarchical manner - thanks be to Our Lord Jesus Christ who did not cling to equality with God).

As part of the traditional ceremonial role, he knocked on the door of Durham Cathedral three times before entering.

After being announced as Bishop of Durham to much applause, he said in his sermon that Christians had a role to play during the tough economic climate and it was a time of “opportunity”.

“We now have a task, a calling from God to rekindle the Christian faith in the North East,” he said.

Bishop Welby was also presented with a sword which, according to ancient legend, was used in medieval times to slay a dragon.

COMMENT: Oh, shit! I better lay low for a while if he's got his hands on that bloody sword. 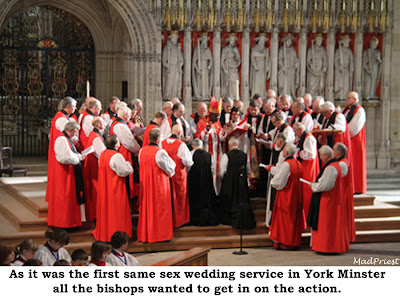