Lt. John Pike, the U.C. Davis campus police officer who pepper-sprayed passive student protesters, is popping up in some of the world’s most famous paintings as part of an Internet meme intended to shame him for his actions. On Friday, Pike casually pepper-sprayed protesters in a video that quickly went viral. Over the weekend, Pike’s visage popped up in Photoshopped into other scenes of languid passivity, such as Edouard Manet’s “Le Dejeuner sur l’Herbe." The images are a cheeky way of fighting back against what students say was an unwarranted use of forceful policing tactics. The university has defended Pike’s actions, though he and two other police officers have been suspended pending an investigation.

MadPriest is not a photoshopper who backs away from a challenge.

So, here is my entry: 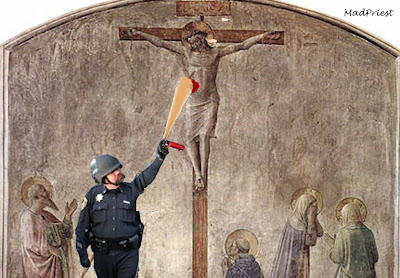