The following is taken from an obituary of a woman who died back in August. However, it has only just been published in THE TELEGRAPH. 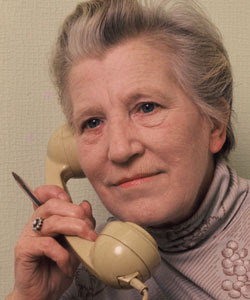 Rose Robertson, who has died aged 94, was an SOE agent in Nazi-occupied France and later founded Britain’s first advice and support service for families with gay children.

In 1965 she took in two young male lodgers. On eventually learning that they were gay and had suffered because of their parents’ homophobic attitudes, Rose Robertson set up Parents Enquiry. This was the first organisation in Britain — and possibly the world — dedicated to advising and supporting parents and their lesbian, gay and bisexual children. She ran it almost single-handedly, without payment, from her home in south-east London until the 1990s.

Rose Robertson typically received 100 phone calls and letters a week — from distressed gay teenagers, many of whom had harmed themselves because of the prejudice they faced, and from parents who were variously distressed, or felt guilty, ashamed and hostile towards their homosexual children. Often she mediated between parents and children, usually with success. A middle-aged, thoroughly heterosexual housewife, she was a reassuring figure.

Rose Robertson opened up her house to gay teenagers who had been thrown out of their homes by their parents, providing them with sleeping bags so that they could stay in her living room.
She also rescued from the sex industry homeless gay youths who had turned to prostitution to support themselves. Amsterdam was a magnet for gay runaways in the 1970s. She made many trips there to bring back teenagers and later persuaded many of their parents to accept them back into the family home.

Occasionally she was verbally abused and physically attacked by irate parents. Usually, she won them round. She was also targeted by homophobes and Right-wing extremists, enduring arson attacks on her home, excrement through the letterbox, abusive phone calls and hate mail.

From the mid-1970s onwards, these attacks eased off. Meanwhile, official reluctance to support gay youths gave way to growing respect for her work. A rising number of referrals came from the police and social services. Authorities which had been wary of supporting gay teenagers, some of whom remained classed as criminals until the age of consent was equalised in 2001, were impressed by her family-oriented approach to reconciling gay children with their parents.

Thanks to Laura who was first to send the link
to this great woman's obituary through to me.