The biggest problem facing the Roman Catholic denomination at this time is the fact that it has nowhere near enough priests to provide anywhere near adequate pastoring for its membership. I was reading the other day about how the Roman Catholic laity in Austria are demanding lay led eucharists (communion by extension) so that they can regularly receive the sacrament. This is not a unique demand, nor is it a novel demand. Liberation theologians in South America were asking for the same lay led services for priestless congregations back in the 1970s.

Throughout the world Roman Catholicism is finding it increasingly difficult to get men to agree to a life without sex, the love of a partner and being able to have thoughts of their own, in order to become an underpaid, overworked fundraiser and enforcer for a tiny, but very influential, European nation's government. In fact, let's be honest here, the only reason there are the number of priests around that there are is that the Roman Catholic hierarchy operates the longest existing "don't ask, don't tell" policy the world has ever known. It is my guess (and pay attention hyperbole spotters there's a biggie coming up) that if they were to strictly enforce the dogma of celibacy and kick out all the priests, gay and straight, who err from the righteous path of no nookie, then they would still have an almost complete compliment of cardinals and bishops (because such people will give up almost anything and everything for such temporal power) but would have so few parish priests that the Vatican would have problems fielding a full side for a football match.

Of course, for a "don't ask, don't tell" policy to work it has to be subject to a "don't ask, don't tell" itself. Basically, the Roman Catholic hierarchy is not going to publicly acknowledge that it has been turning a blind eye to the perfectly natural and understandable failure of its priesthood to keep it zipped in. Therefore, this report from THE SYDNEY MORNING HERALD concerning the heartless bullying of an octogenarian priest in Den Bosch diocese in the central Netherlands shows Roman Catholic companymen being refreshingly honest for a change.

"We are giving him the choice: either he leaves his partner or he leaves the priesthood," said a diocesan spokesman, Michiel Savelsbergh.

But Father Peijnenburg told the daily newspaper AD, through a friend, that the church had known of his relationship for about a decade. In a veiled admission of complicity, the diocese said it had given the ultimatum after Father Peijnenburg wrote a leaflet criticising priestly celibacy which "confirmed what we knew".

Father Peijnenburg has until December 1 to decide but his choice is already made: love over religion.

"Naturally I choose Threes. We are staying together," Father Peijnenburg said.

For getting the bit about love always being more important than cultic legislation, Jan and Threes are OCICBW...'s: 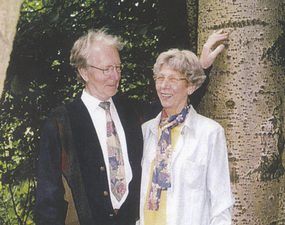