The "Church of England Newspaper" has absolutely nothing to do with the official Church of England and is about as Anglican as ACNA (in other words, not at all). It has a very low weekly circulation compared to "The Church Times," equal to just a third of the "unique" vistors who visit OCICBW.... This is good because it is a nasty little rag.

An Anglican newspaper has defended the publication of an article that compares gay rights campaigners to Nazis, saying the author has "pertinent views". The column, by former east London councillor Alan Craig, appeared in the 28 October edition of the Church of England Newspaper. 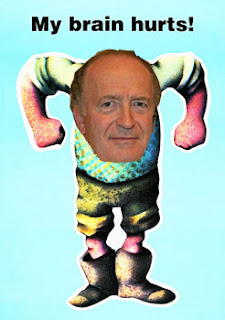 In his column Craig referred to a number of high-profile legal cases where Christians claim to have been penalised for their views on homosexuality.

He wrote: "Having forcibly – and understandably – rectified the Versailles-type injustices and humiliations foisted on the homosexual community, the UK's victorious Gaystapo are now on a roll. Their gay-rights stormtroopers take no prisoners as they annex our wider culture, and hotel owners, registrars, magistrates, doctors, counsellors, and foster parents find themselves crushed under the pink jackboot.

"Thanks especially to the green light from a permissive New Labour government, the gay Wehrmacht is on its long march through the institutions and has already occupied the Sudetenland social uplands of the Home Office, the educational establishment, the politically-correct police. Following a plethora of equalities legislation, homosexuals are now protected and privileged by sexual orientation regulations and have achieved legal equality by way of civil partnerships. But it's only 1938 and Nazi expansionist ambitions are far from sated."

Craig told the Guardian he was "pretty careful" to distinguish between the leadership of gay rights groups and "ordinary gay people".

Do not think for one moment that Alan "Winston" Craig is a lone voice in English evangelicalism. Mark "Hawkeye" Harris has posted on the pressure group, FULCRUM, at PRELUDIUM today. Although they claim to be evangelical centrists, compassionate and thoughtful, their eagerness to align the Church of England with the aggressively homophobic and misogynist provinces of the Anglican Communion conclusively demonstrates, in my opinion, that they are merely, to use Craig's language, their faction's equivalent of the Theresienstadt concentration camp. I have no idea why evangelicals hate so many people but prejudice and bigotry are obviously inherent in the psyche of the vast majority of bible worshippers. Thank goodness there are open and honest evangelicals like Alan Craig around who are prepared to tell the whole world what these distorters of the Gospel really believe.