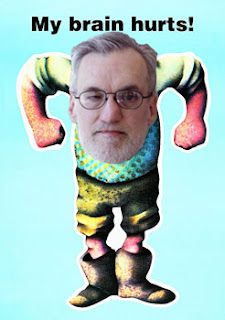 No one has found a “gay gene.” Identical twins are always, of course, the same sex, providing further proof of male and female genes. If there was a gay gene, then when one twin exhibits same-sex attraction, his or her identical sibling should too. But that is not the case. The incidence of finding identical twins with identical same-sex attraction is relatively rare and certainly not anywhere near one hundred percent. Something other than the hardwiring found in the genetic code must explain the variance...

...In other words, the scientific evidence of how same-sex attraction most likely may be created provides a credible basis for a spiritual explanation that indicts the devil. Any time natural disasters occur, we as people of faith look back to Scripture’s account of those angels who rebelled and fell from grace. In their anger against God, these malcontents prowl about the world seeking the ruin of souls. They continue to do all they can to mar, distort and destroy God’s handiwork. Therefore, whenever natural causes disturb otherwise typical biological development, leading to the personally unchosen beginnings of same-sex attraction, the ultimate responsibility, on a theological level, is and should be imputed to the evil one, not God. Applying this aspect of Catholic belief to interpret the scientific data makes more sense because it does not place God in the awkward position of blessing two mutually incompatible realities — sexual difference and same-sex attraction. (Daniel Avila)

COMMENT: Well, the devil might explain KJ's behaviour but, to be honest, I tend to find the nuns I know to be far more wicked than the gay people I know - and no devil is going to go anywhere near a nun (demons are far too sensible to risk it).

But there is good news. Public opinion in the US is definitely swinging towards an anti-homophobic stance to such an extent that the Roman Catholic Church is having to bear it in mind.

From THE BOSTON PILOT (today):

A policy adviser to the U.S. bishops has resigned following a controversy over an opinion piece he wrote suggesting that same-sex attraction could be the work of the devil. Daniel Avila, policy adviser for marriage and family to the U.S. bishops' Subcommittee for the Promotion and Defense of Marriage since June 20, offered his resignation Nov. 4 and it was accepted, effective immediately.

Terrence Donilon, spokesman for the Boston Archdiocese, told Catholic News Service the column was pulled because Avila "retracted it and apologized and because it simply should not have been printed/published in The Pilot."

"It is not the position of the archdiocese or the church and is simply wrong," he said in a Nov. 3 email.