Members, lay and clerical, of the various deanery synods of Newcastle Diocese, in England, were recently invited to a meeting in which, they were told, the issue of women bishops would be discussed. Now, deanery synods are the most boring occasions in the Church of England. They have absolutely no authority whatsoever and the meetings usually consist of the Reverend Lukatmi's holiday snaps of his trip to the Holy Land. But the lure of something interesting to talk about, maybe even a "spirited" debate, meant that, for once, everybody tried to get there for this one.

However, the first thing they were all told when the meeting started was that there would be no discussion about whether or not women should be ordained to the episcopacy. Instead they were to sit there and be told about the processes which would be involved.

Heck! I if I had a job I would willingly risk it to further full equality for women within the Church but squashing dissent and stopping the airing of heartfelt concerns about the opening up of the top jobs to women is not the way to go about it.

Furthermore, even though the Bishop's Council (underline "bishop") of Newcastle Diocese discussed the issue of debating the Anglican Covenant at diocesan level some weeks ago there is still no word from Bishop's House concerning how this will happen. In particular there is a deathly silence about whether or not those against the Covenant will be allowed to put there side of things prior to any meeting that takes place and so balance out, to some extent, the pro-Covenant propaganda that is being freely distributed throughout the Church of England by it's bishops. 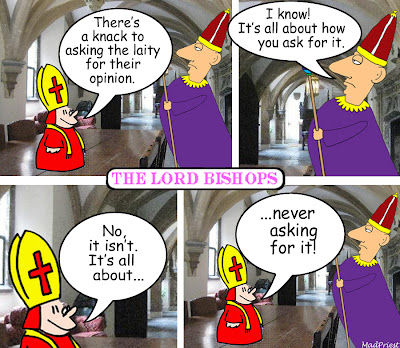