Zimbabwe's beleaguered gays got a boost from Prime Minister Morgan Tsvangirai who reversed his position and voiced his support for gay rights.

Gay rights should be enshrined in a new constitution for Zimbabwe, said Tsvangirai, in an interview with the BBC. He said that gay rights are a "human right" that conservative Zimbabweans should respect.

Last year, Tsvangirai joined President Robert Mugabe in opposing homosexuality. But in the new interview he staked out an opposing position. Tsvangirai's Movement for Democratic Change has been in a controversial power sharing government with Mugabe's ruling Zanu-PF party. The two leaders have promised political reforms ahead of next year's elections. Zimbabwe is in the process of drafting a new constitution, which will be put to a referendum ahead of the elections. Homosexual acts are currently illegal in Zimbabwe, as in most African countries where many people view homosexuality as un-Christian and un-African.

Mr Tsvangirai said there is a "very strong cultural feeling" against homosexuality in Zimbabwe, but he would defend gay rights if he became president.

"It's a very controversial subject in my part of the world. My attitude is that I hope the constitution will come out with freedom of sexual orientation, for as long as it does not interfere with anybody," said Tsvangirai.

COMMENT: I think Mr Tsvangirai is playing a canny long game here. Mugabe is dying and Tsvangirai is ready and waiting to take over the leadership of his country (he won the last elections and it was only Mugabe's refusal to stand down that relegated him to the political sidelines albeit with a fancy title). Zimbabwe is financially up the creek without a paddle and the only way Tsvangirai's party will stay in power is if they sort the economy out. The most likely place to get financial help from is Britain as we feel incredibly guilty about the whole empire thing and we were right bastards during the struggle of native Zimbabweans to gain independence. But we now have a policy of penalising countries that persecute gay people through their legal system by reducing the aid we give them.

I think Mr Tsvangirai will be a very wise leader of Zimbabwe if he ever gets the job. 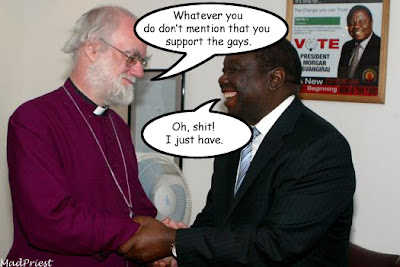