We spent an hour or so wandering around the camp. Wherever we went, people were very welcoming. A motley crowd gathered and sang a mangled and tuneless version of “Amazing Grace” with great gusto. Ted and I visited the nearby Tesco and came back with a small donation for the food tent. “Thank you so much,” said the man warmly, accepting our potatoes and soya milk, “Please join us for some soup.” It’s possibly the friendliest place in London. The contrast couldn’t have been starker when we walked to Bank station to come home. As I struggled down the steps carrying Ted in his pushchair, a man in a suit huffed and elbowed me out of the way in his rush to reach the lifts.

This evening, the Guardian reports that the Cathedral may seek an injunction to force the protesters to move. As they rightly say, the sight of police officers dragging peaceful protesters from the shadow of a Cathedral would be a PR nightmare. But it’s so much sadder than that. Above all, St Paul’s is the house of God: the premier house of God in this great city. I spent some time this morning before we went to St Paul’s, reading what Jesus had to say about money and our relationship with it. As you probably know, he said a lot, all of it uncompromising. Try this: Luke 16:13 – "No servant can serve two masters. Either he will hate the one and love the other, or he will be devoted to the one and despise the other. You cannot serve both God and Money." Jesus repeatedly said that we should reject riches on earth in favour of spiritual wealth, and that we should do our best to care for those who are in need. As we looked up at the great, wooden closed doors of St Paul’s Cathedral, I couldn’t help thinking that if Jesus were there, I think I know which side of the doors he would be on.

Posted on the ROSIE FIORE blog.

Go check out the rest for a visitors view
of the Siege of Saint Paul's (that never was). 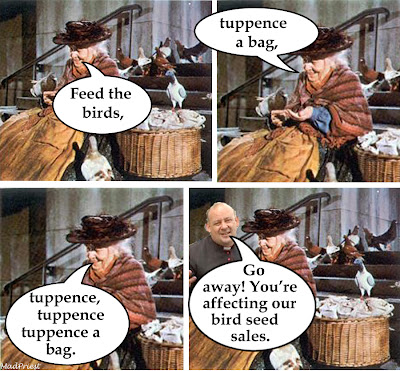