Lesley, from LESLEY'S BLOG, and Alan, the bloke she shacks up with, have, at last, been given a moving date. It's the 25th. October, so the newly weds have very little time to get packed and say their goodbyes. Please pray for their children who are having to say goodbye to friends and move school yet again.

In a meeting today with Turkish Cypriot leader Derviş Eroğlu, Marina Yannakoudakis, Conservative MEP for London, protested against the continued ban on homosexuality in the northern part of Cyprus. Marina received assurances from Dr. Eroğlu that the Turkish Cypriot community was seeking to repeal the ban. Dr. Eroğlu then promised Marina that he would sign the repeal into law.

Two senior Ulster Unionist politicians will not face Orange Order punishment for attending the funeral of a Catholic police officer murdered by dissident republicans. Party leader Tom Elliott and Stormont regional development minister Danny Kennedy, both long-time Orangemen, were subject to a complaint from an Orange lodge in Belfast for their decision to attend Requiem Mass for Constable Ronan Kerr in April. According to Orange Order rules, members are forbidden from taking part in religious services that are not of the reformed Protestant faith. But after the politicians attended disciplinary hearings, the Order's leadership has now decided not to uphold the complaint.

"I've never seen anything like this," said Douglas Ormachea as he watched indigenous protesters enter La Paz at the end of a two-month march from Bolivia's Amazon lowlands.

"Not even the Pope got such a reception when he came to Bolivia."

Mr Ormachea was among the crowds of cheering people lining the streets of La Paz, the seat of government, as the marchers paraded like heroes at the end of their 65-day trek. The group of some 1,000 people set out on the walk to highlight their opposition to the construction of a controversial road through a rainforest reserve known as Tipnis. 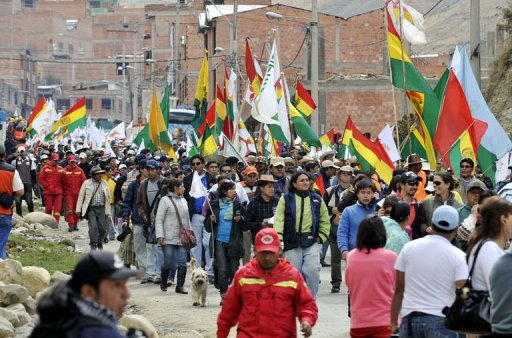 The story below is what has been happening here. Without revealing every gory detail I would like to be included once again on your prayer list.

This is my Snowgirl's story. She is about 9 years old. All four cats have been living together peacefully for 7.5 years. Sometime this summer (mid-Aug.?) Snowy attacked Diamond, my oldest cat. Diamond now has PTSD and high blood pressure. This was followed by an infestation of fleas. All four cats were treated. BTW, the cats NEVER go out! I was told a human brought the fleas in and they have been present in huge numbers this year due to excess rain and ultra high humidity.

Snowy had actually spent an overnight at the vet due to her fleas. She was bathed as well as being treated. When I brought her home she refused to use the litter box and would only go on my clothing. After several episodes of this I had to remove her from the house. Diamond had been living in the garage in sheer terror has now come back in the house about 70% of the time. Snowy is being boarded at the vet going on three weeks now. I have called numerous no kill shelters and all are booked to capacity. I've been advised that even if a shelter such as the SPCA takes her, she will be euthanized.

Right now it appears there is no hope for Snowy. I cannot afford to board her indefinitely. It is breaking my heart ... tearing me to shreds actually. Snowy would most likely need to be an "only cat" and I can't guarantee the box problem.

Do you have any thoughts? Ideas? I am desperate to try and save her life.

Prayers and sympathy are greatly appreciated.

This pretty much summarizes what has been going on. The other problem is that my house has about 15 years of clutter everywhere. The woman who was just beginning to help me clear it quit when the fleas arrived and won't come back until the fleas are gone. The exterminators won't come until the clutter is gone as all floor areas must be clear ... closets included! I've been caught in an endless loop. Finally getting some help via a guy at church but we have a LONG way to go!

We pray for the people of Libya.