An Ohio sheriff believes no more exotic animals are on the loose after his deputies killed 49 lions, tigers and other wild animals freed from a local farm by its suicidal owner. Of the 56 animals released Tuesday night, only a grizzly bear, two monkeys and three leopards were taken alive, Muskingum County Sheriff Matt Lutz said. One monkey remained unaccounted for Wednesday night, but conservationist Jack Hanna, who assisted in the effort, said the animal may have been eaten.

None of the deputies were equipped with tranquilizer guns.

COMMENT: This is terrible. Not just the fact that all these rare and beautiful animals were killed due to no fault of their own. But mainly because Americans are allowed to keep wild animals locked up for their own pleasure or for making money. When will the people of the USA realise that freedom and doing whatever you want whenever you want and damn the consequences, are two completely different things? 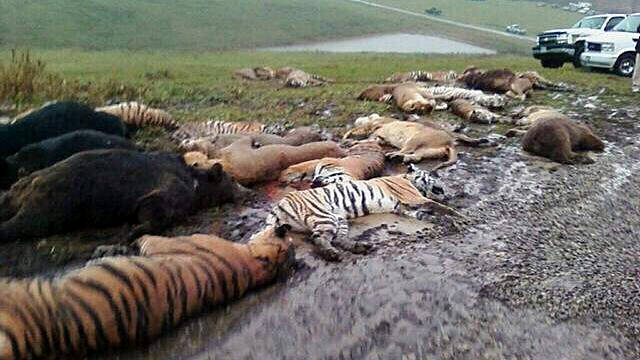