This is what happens when you don't actually read the post but just jump straight in on your favourite hobby horse. 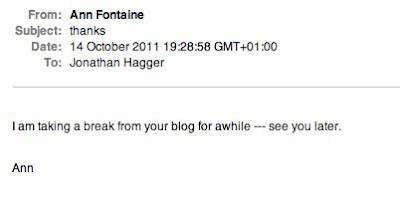 All Ann appears to have read in my post is the first paragraph. If she had read the whole post she would have noticed that most of it was about the similarities between legalistic Islam and legalistic Judaism and Christianity. That was the whole point of the post.

But it never stops there. People then comment on the comment of the person who didn't bother reading the post and the whole thread gets hijacked by people hurling insults at each other instead of addressing the post itself that had taken hours to put together.

And calling a friend a racist at the first opportunity is a bit off. The statement, "Islam is a bad religion" is only a racist statement if Richard Dawkins having a go at Christianity is racist. I have every right to say I think a particular ideology is destructive and oppressive. I never once said Muslims were a bad idea but Ann and others constantly commented as if I had.

One of the most painful things about blogging is when you end up being the fall guy in someone else's guilt trip.

So, please stop it.

Thank you to the few of you who did bother to read the post and get what it was actually about.