The authorities in Burma have released more than 100 political prisoners at the start of a general amnesty. A popular comedian, Zarganar, was among the first to be freed. He was arrested in 2008 after publicly criticising the response to Cyclone Nargis, which killed more than 140,000 people.

Zarganar was wary of his new found freedom, describing it as conditional. "If I do something wrong they will send me back," he said.

"I'm not happy today," he said, "because there are so many of my friends still in prison."

We prayed for Zarganar here at OCICBW... back in 2008 when he was arrested. 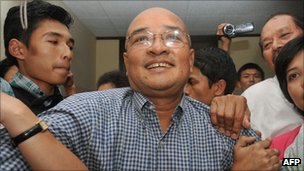 Posted by Sally at ETERNAL ECHOES:

I don't want to be here, in this place where I am questioning my call, my ability, my worth, my heart does not so much ache as feel empty and tired, I know that God is near but I can't pray easily as I have no words, so I am silent. I want to have energy and vision, I want to be out and doing, but getting out of bed is a triumph for today. I want to be out among people and yet the thought of meeting folk is exhausting in itself. Life is an effort rather than a joy, and although I may look fine on the outside, I can drive and shop for food, and I will say hi to you if you stop and speak to me, all of this is costly for my soul right now. As a natural extrovert depression turns me into a deep introvert, and that is an uncomfortable place to be.

Posted by Judy at MYSTICAL MIDGET:

A Facebook friend of mine, Jeff, died recently. He was only 54, younger than I am, and had suffered from muscular dystrophy. Close to the end, he had only 10% of his lung function, and was on a ventilator.

I was saddened by his passing, but I'm amazed by his courage.

A week ago Saturday, Jeff had a party. Twenty or so of his closest friends were there, as were his parish priest, his two adult children, and his physician and hospice nurse. After feasting on his favorite foods, including large quantities of chocolate, Jeff gathered his friends together to watch as he received Last Rites. At that point, the doctor administered to Jeff a dose of ativan, and, at Jeff's direction, removed his ventilator. With his children at his side and his friends offering comfort, Jeff died peacefully. 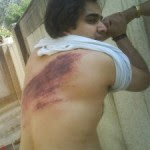 Iranian student, Peyman Aref, a student of political science at Tehran University, was sentenced in March 2010 to a year in jail after being found guilty of propaganda against the regime for speaking to foreign media. Aref, who was initially arrested in the aftermath of Iran's disputed presidential elections in 2009, was also sentenced to 74 lashes for writing an "insulting" letter to Ahmadinejad and given a lifetime ban on working as a journalist or membership of any political parties. His jail sentence came to an end on Sunday but, hours before his release from Tehran's notorious Evin prison, Aref was told the lashing would be carried out. A masked prison guard carried out the lashing in presence of Aref's wife and officials from Iran's judiciary. 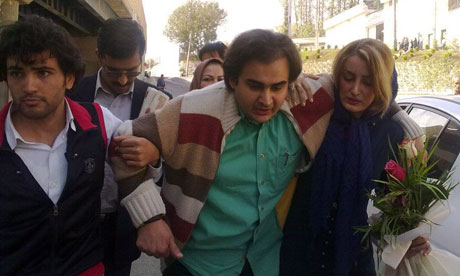 Insurgents mounted several attacks on Iraqi security forces in Baghdad on Wednesday, killing at least 15 and wounding scores. Two suicide attackers detonated car bombs near police stations in residential neighbourhoods in Baghdad, and another car bomb targeting a police patrol was detonated near the airport. In one of the more brazen attempts in recent months, insurgents placed a roadside bomb at an entrance to the Interior Ministry. Security officers discovered the device before it went off.