Today's gumbiism proves conclusively that evolution does not always progress in a forward direction especially in respect of human mental faculties. Okay, today's gumby was the leader of the Scottish Nationalist Party and, of course, Scotland has only just become what can accurately be called a "civilised nation" (in fact, there are many areas in Scotland where missionaries still go missing). But this level of sub-moronic reasoning is unforgivable for any biped claiming the species category of homo sapiens, Scots included. 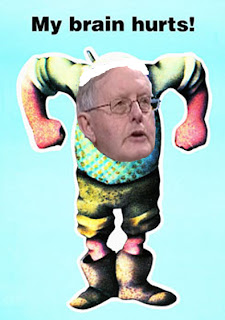 Former SNP leader, Gordon Wilson, has called for a referendum on government proposals to allow same-sex marriage, which he warned could have “extremely destructive consequences” for Scotland. In a nine-page submission to the Scottish Government’s public consultation on the issue, Mr Wilson described the legalisation of same-sex marriages as “an assault on Christian values” and warned that it could lead to “social disintegration” and “sexual confusion.” (SCOTSMAN)

Yeah, like sexuality isn't, by its very nature, confusing, especially for adolescents. Getting rid of the taboos surrounding perfectly natural sexual practices and identities would actually make the whole issue of sex a lot less confusing. And as for social disintegration, I don't think that could possibly get any worse in Scotland (as is also the case for the rest of the UK). I really don't think a few thousand same sex couples getting legal recognition for their life long partnerships is going to make the Glasgow neds act any more sub-humanly. In fact, there is just a faint possibility that it will actually encourage some dysfunctional family units to get their act together and start taking responsibility for their lives and loved ones.