I see that, once again, the lifetime president of the Vatican Nation (a small independent state in the middle of Rome, Italy) has instructed his ambassadors in the USA to tell one quarter of the citizens of the United States how they must vote in the next round of elections. Of course, the first commandment, as usual, is not to vote for any candidate who supports abortion in any form and for any reason.

It's so typical of so-called Christian institutions to tell their members what not to do. The ministry of propaganda in Rome has just issued a statement that it is no longer permissible for  a Roman Catholic to be in favour of the death penalty in any circumstance. Now that is good news. But do Rome's minions in the USA get told to vote for candidates who want to rid their land of this barbaric practice. No, they don't. It's don't do this and don't do that and if you do you'll be damned to hell.

The Christian life should be based on the desire to do good born out of the freedom Christ has won for us. But, with good reason, non-believers see the Christian life as a straightjacket made up of don't dos and tied up with compulsion and fear. 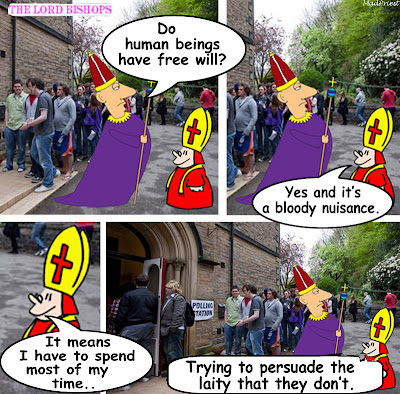