This is Escomb Church in County Durham. Built circa 670-675 it is the oldest, still complete, Anglo-Saxon church in England. It is a physical link to the Celtic missionaries and the churches they established in the north of England before the British Church was completely hijacked by Italians. Notice the word "before" in that sentence. St. Augustine did not bring Christianity to England or establish the first church here. In the north of England, Anglo-Saxons were first converted to Christianity by Irish missionaries and their Scottish converts. The Irish were evangelised by a Christian, Patrick, who was from the British mainland somewhere. He was from a Christian community which was, most probably, founded after contact with Christians attached to the Roman army, the Roman civil service or merchants. The form of Christianity espoused by Patrick shows a very strong influence, not from Rome, but from the Syrian and North African churches. And, of course, as regular readers will already know full well and accept as undeniable fact, Jesus and his Uncle Joseph of Arimathea were over here planting holy thorn bushes years before there was any such thing as a church in Palestine. Plus, Saint Peter popped over to establish a church in the Welsh borders on his way to Rome. I hope that is all clear now.

The Saxon church at Escomb is built mostly from stones taken from the Roman fort at nearby Binchester. Waste not, want not and the Romans had long since cleared off back to Italy.

The churchyard is circular which indicates that the church is built on a pagan site or, maybe, a Roman velodrome. 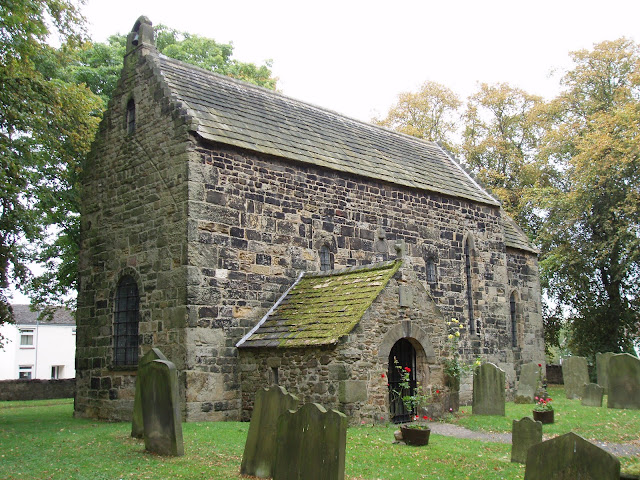 The sundial above the door is likely to be slightly older than the church... 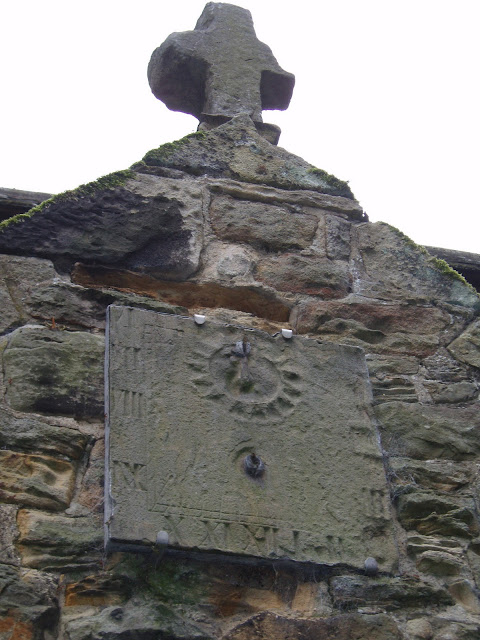 ... as is this fine example of an Anglo-Saxon cross. Crosses such as this one were placed outdoors at locations that were regularly visited by missionaries who would preach beside them. If the faith took a church would often be built on the site of the cross. 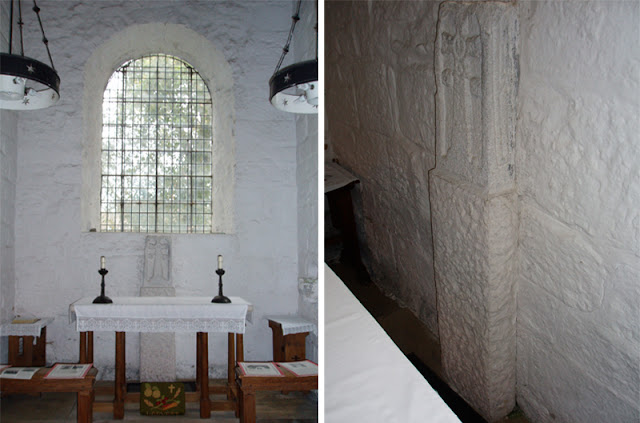 This gravestone is made of marble mined locally. It is packed with fossils (just like the Church of England is nowadays). 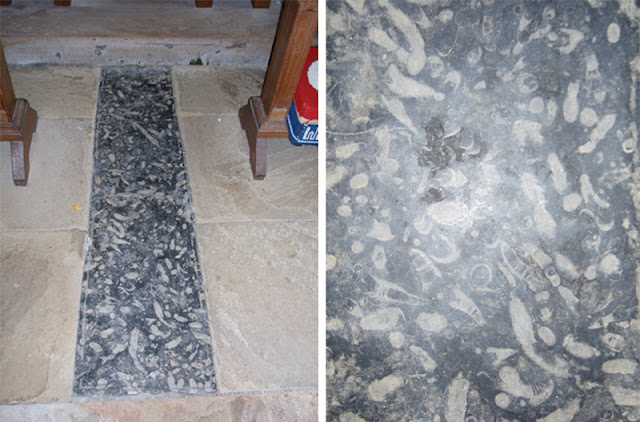 In a couple of places you can see the remnants of the paintings that would have covered the walls during the Middle Ages. These were largely destroyed at the Reformation when it was discovered that God had made a mistake when he gave humans the ability to create beautiful works of art and that God hated the stuff just as much as God hated people enjoying themselves. 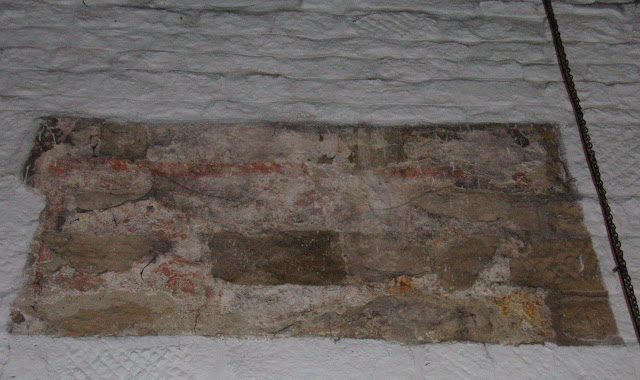 The oldest reference in writing we have for the font makes it at least seven hundred years old, but it could be much more ancient. It was made at a time when it was the practice of the Church in England to baptise babies by dunking them fully underwater. Adults would have either been half drowned in a local river or baptised whilst standing in the font, the basin of which would have been on the floor, not a pedestal, back then. On this font you can see the remains of a medieval hinge. A law had been passed making it compulsory to have a locked lid on all fonts so that nobody could steal the holy water which was worth a fair bit on the open market. Nobody was allowed to undercut the pope's prices. 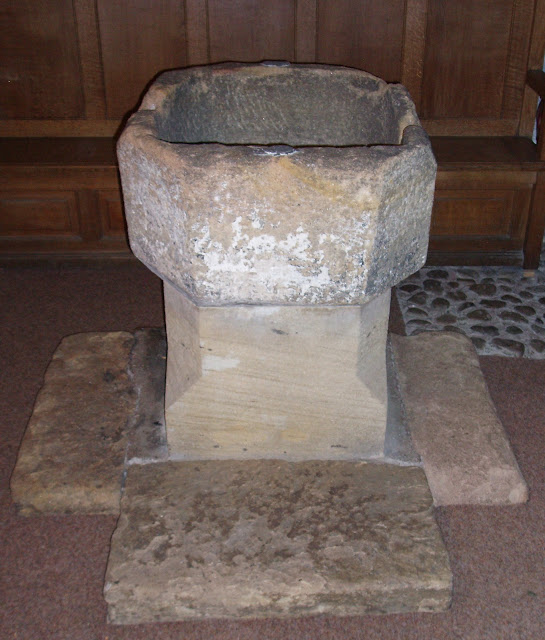 Here's a photo looking back towards the font from the altar. I live with that woman. 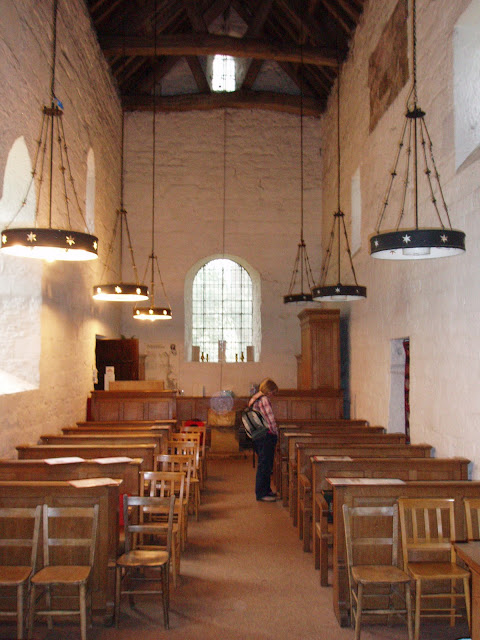 Outside there are some fine examples of Seventeenth Century gravestones. My, they were a fun loving people in those days. I didn't take these two photos as I had forgot to recharge the camera batteries and they ran out half way through our visit. This resulted in language coming from my mouth that could also be dated to the Anglo-Saxon period. 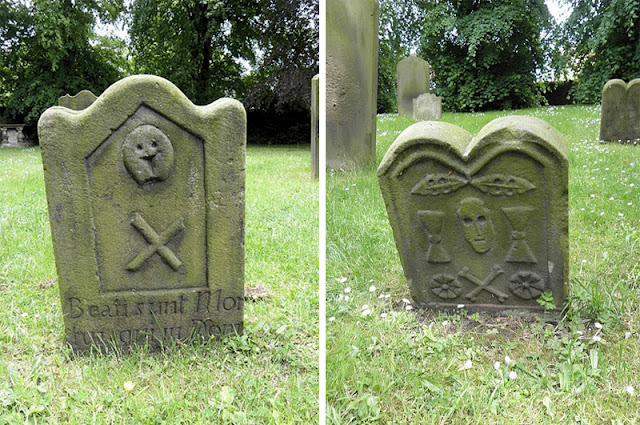