Yesterday, both here and on Facebook, I congratulated the United States for finally getting rid of "Don't Ask, Don't Tell" from their armed forces. I did, of course, point out that here in England we have been open about such things for quite some time now. To which, my friend, Larry, replied "What about women bishops, then?"

Yes. It has to be admitted, that although we have very few objections to homosexuality in England (our private schools, top universities, seminaries and, of course, our secret intelligence service, have, in fact, been actively encouraging it for hundreds of years), we do still have enormous problems with female sexuality, especially within the Church of England. It has always been the belief of the Church that because Jesus and his disciples were all gay men that only gay men should be ordained priests in the Church of England. About twenty years ago, after close examination of Leonardo Da Vinci's "Last Woking Lunch" painting, our theologians announced that the "beloved disciple" was not Jesus's gentleman friend, John, but was, in fact, Mary Magdalene. This led to Archbishop George Carey telling us we had to "put up" with women being priests from then on. Most of us agreed with this new thing but, as Jesus was most definitely a man (the proof being that he had a beard) a lot of the church's members are still very much against the idea of women bishops.

Discussions regarding the ordination of women to the episcopacy seem to have reached a stalemate. Or rather, they had until yesterday when my conversation with Larry led to me having a brilliant idea. The United States armed forces didn't jump straight from "no gays" to "yes gays." They first went through a period of getting used to the idea of gay people being allowed to serve (a period of reception) in which they abided by the policy of "Don't ask, don't tell."

Why don't we do the same in the Church of England?

I suggest that, for the time being, as long as female bishops don't publicly admit to being women they should be allowed to serve in the English episcopacy. 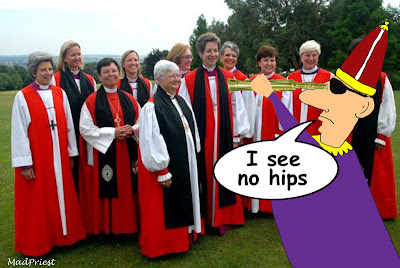