Two of our friends have attended the funeral of a loved one recently.

Elizabeth Kaeton conducted the funeral of Annie, who was obviously a "real character." You can read Elizabeth's tribute to her friend at TELLING SECRETS.

Christine McIntosh, who had to cancel her holiday recently due to a back injury, enjoyed the "silver lining" of being able to attend the funeral of the musician and scholar, Kenneth Elliott. It was a time for happy memories that you can read all about at BLETHERS.

I'm still suffering from the after effects of the virus I was struck down with last week. I'm very lethargic and still full of gunk. I went to bed at 8 o'clock yesterday and slept for 12 hours. That's not like me at all. 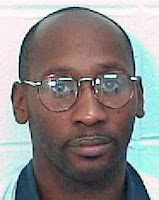 We pray for Troy Davis who is to be executed in Georgia today.

We pray for his family, friends, legal team and all those who have fought for clemency.

We pray also for the United States of America, a nation that would rather spend millions and millions of dollars on revenge rather than on tackling the causes of crime. A nation that insists its public servants call for and take part in pre-meditated murder and so break the commandment of the God they profess to worship.

Mexican gunmen blocked an underpass on a busy road in the state of Veracruz and abandoned 35 bodies in the backs of two trucks. Some of the victims had their hands tied and showed signs of having been tortured.

Chad Gandiya, Zimbabwe's top Anglican bishop, said Tuesday that Nolbert Kunonga, an excommunicated church leader close to the country's president, has taken over an orphanage housing 80 children. He has also has seized mission schools and priests' homes on the church premises near Murewa, some 50 miles east of the capital, Harare. Worshippers now congregate instead under the shade of trees beside a dirt road.

We pray that Rowan Williams' official visit to Zimbabwe, and his meeting with Mugabe, in October, will result in an end to Kunonaga and Mugabe's campaign of hatred against the Anglican church rather than becoming just a propaganda opportunity for the Zimbabwe government as is presently feared.