Actress Kristin Chenoweth has sparked controversy by speaking out about her support of the gay community in an interview with lesbian and gay publication The Advocate.

The LGBT publication asked her, "What would you ask people who cite Christianity as their justification for passing laws that discriminate against people?"

Kristin is not new to controversy over her conflicting beliefs. In 2005, she was fired from a "Woman in Faith" concert for her support of gay rights.

In response to critics she said, "I don't judge you for your opinions, so please don't judge me for mine. I read my Bible and I pray and all of that – I really do. But at the same time, I don't think being gay is a sin. Period."

COMMENT: Not only has Kristin got herself fast tracked to a definite Babelicious Bishop post but for proving, beyond doubt, that not all blonde Christians are lacking in the brain cell department she is also hereby declared OCICBW...'s 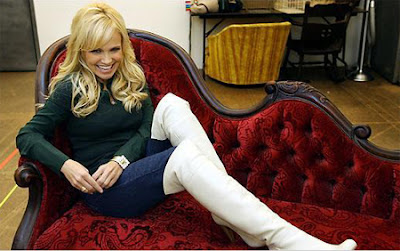